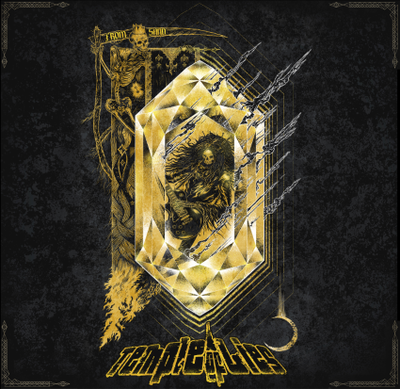 With the number of sub-genres currently available to the public, it can be quite difficult to know exactly where to categorise a band such as Temple Of Lies. They have been associated since the birth of their existence as ‘stoner rock’ but after the release of their second album, ‘From Sand’, the title falls subsequently short as an accurate definition.

The eleven tracks could easily find their home in any rock bar that defines mainstream music an abnormality but to anyone looking to file them under a specific section, then the first place to consider should be post-grunge or southern grunge rock.

Some characteristics, including a basic heavy-hearted bass foundation, suggest a fitting stepping stone towards their coined label but the slow/mid tempo usually present is often replaced by a paced pesto time signature, along with Mr Shaw’s heated grunge influenced vocals adding a pinch of rock-strewn coarseness to the concoction, leaving the argument to eventually submit and roll downhill towards the inevitable conclusion.

One of the hidden gems of this English quartet is arguably Jon Scranney’s writing methods and alternating guitar techniques which bring together a combination of immediate plucking motions and attractive riff arrangement, made example of in songs such as the funk-heavy “Bats” and sludge-based “Riff Machine”.

Instrumentally, “From Sand” proves to be the strongest material with its overall demeanour coinciding strongly with the connotation of building your own kingdom from the ground up, only to be met with feelings of inferiority. “Pigbitch” also infuses its musical core with one pig-bitching guitar solo of technical proportions, thus forming one concrete mass without straying off into fragments of irrelevance.

Although slight alterations could have been considered in the production process, ‘From Sand’ demonstrates how modern rock can easily be detached from its commonplace shackles. Signing out on a fading guitar note, the metaphorical pain lingering behind the pitch is undoubtedly present whereas the music overview is substantially satisfying.