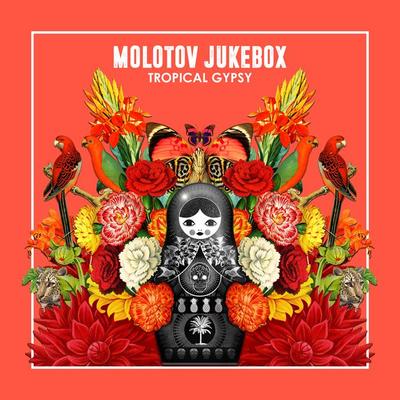 Molotov Jukebox are a group with a lead singer familiar to Harry Potter devotees. Natalia Tena played Nymphodora Tonks in three of the films and became something of a fan favourite. In this entertainment incarnation she fronts the group’s second album ‘Tropical Gypsy’.

It starts with a drum solo, which is something of a departure, which leads in to the Caribbean flavoured ‘Pineapple Girl’, an infectious tune that immediately has you swaying to the rhythm.

Tena’s deliciously different voice has echoes of the marvelous Claire Grogan, another singer/actress who fronted Altered Images and starred in ‘Gregory’s Girl’. ‘Just the Thrill’ channels has a Ska style feel while ‘Dancing with the Dead’ has the Tropical Gypsy vibe of the title.

‘Halfway There’ could easily be one of the soundtrack songs for ‘Death in Paradise’ and would not be out of place with the native Caribbean reggae that the programme often uses.

This album makes you feel as if you are attending a very relaxed party on a moon drenched beach, and its' insistent rhythms, swinging brass sections and those very individual vocals seem to hypnotize you especially when the lyrics switch to Spanish on occasions.

Every single track has something that lifts it out of the ordinary, but the last track ‘Gypsy Funeral’ is an absolute winner. The Eastern European vibe mixes with the Latin beats to draw you in to the procession while the lyrics of loss and despair, with Tena’s voice calling to mind the great Eddi Reader on this track, are surprisingly affecting.

One of the joys of reviewing is finding hidden gems like this. It might end up being a little too idiosyncratic for mainstream tastes but it is without doubt one of the most infectious and entertaining albums of the year so far.