M83's Junk Is A Self-Fulfilling Prophecy 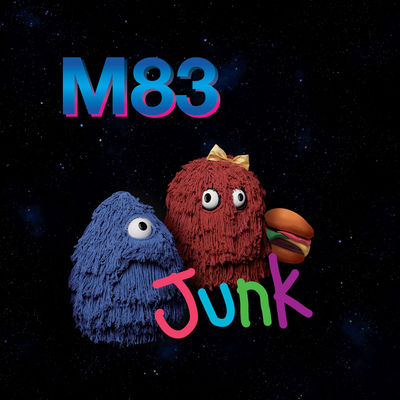 The French electro-pop connoisseurs are best known for providing the soundtrack to E4's reality TV series Made In Chelsea. Now, they're looking to emulate that mainstream success with their sixth studio album, 'Junk' - released today.

Featuring new members J.Laser and Kaela Sinclair, it’s the first album without M83 staple, singer and keyboardist, Morgan Kibby. However, founder member Anthony Gonzalez remains, to give the band a level of consistency.

'Junk' attempts to revive 80s electro by fusing it with 70s disco. The first track, 'Do It, Try it', feels more like a budget Justice. It's got the breathy, floaty vocals you'd expect from M83, but without the throng of a dirty bassline or any hint of modernity.

'Bibi The Dog' is more what I was anticipating. It's French, sexy and has a catchy chorus. It maintains sensual rhythms throughout, despite the Pinky & Perky vocals at the end.

From here on in, the remaining eleven tracks go from nostalgic and corny to messy and confused. Even the sweeping Bond-esque strings in 'Solitude' fail to save it from falling deeper into a kaleidoscope of 8-bit, keytars and Rubik's Cube dancefloors, but not in a good way.

I first discovered M83 back in 2008 when they released ‘Saturdays = Youth’. They worked with Sugar Cubes, Sigur Ros, Cocteau Twins and Suede producer Ken Thomas, and his influence showed. It was ethereal, melancholic and edgy with bags of 80s energy, plus a huge dollop of progressive electro-chic.

Since then, their last offering, 'Hurry Up, We're Dreaming', released four years ago, was critically acclaimed. The 11-track album reached number seven in the UK indie charts and featured on many a TV show, advert and movie soundtrack, so I had high hopes for the 15 tracks on their latest album.

However, it's largely forgettable; lacking any sort of identity or direction. Other than 80s, I struggle to find any adjectives, let alone superlatives. Are they a visceral band, a cerebral band, a dance act, indie or concept? Perhaps they want to be all of the above, so they're nailing all their colours to the mast, but this makes it difficult to engage with it.

This album is a mish-mash of Go Team, Bonobo and Justice. Apart from they've taken the vanilla, diluted parts of those bands and created something blander than a beige lettuce leaf.