PJ Harvey & Her Musical Musings Around The World 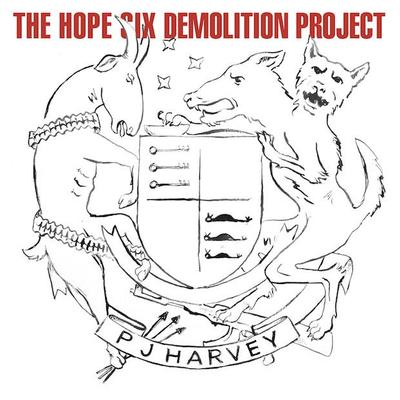 Polly. Jean. Two genteel girls’ names ringing out with respectable Victoriana virtuousness. Either of which could easily belong to an elderly great-aunt in a buttoned up ruffled collared blouse and a floor length bustle skirt. But put those two names together and you have one of the greatest rock gods of the last quarter century or so.

Yes - Polly Jean, otherwise known as ‘PJ’ Harvey, with her quintessentially English beginnings, and her ever increasing multifaceted musical talents is back with a thought provoking album that wholly secures her place in recent rock history.

‘The Hope Six Demolition Project’ is an album (Harvey’s 9th studio release) that was written over the course of a four year voyage through widely variating landscapes including Kosovo, Afghanistan and Washington DC, culminating in an open recording session at Somerset House in London with a live audience.

This is art, travel, discovery, inventiveness and song all packed up in one rucksack, shaken about in the hold, thrown around by cantankerous baggage handlers, yesterday’s crumpled underwear turned inside-out and washed in a murky river along the way, and still somehow managing to glide through arrivals looking as fresh as a daisy.

The feeling of travel, exploration and seeing the world through Harvey’s musical periscope comes across so strongly on this collection of songs. It’s global and universal and makes me ponder the similarities from city to city, beyond boundaries and borders, and how the experiences of the inhabitants of one part of the world can have so many parallels with those in distant geographical locations.

The album begins with a visit to Ward 7, downtown Washington DC, and Harvey tells it exactly like it is, much to the chagrin of the area’s residents, and the community groups desperately trying to make changes. In ‘The Community of Hope’, (where “the school just looks like a shithole” and there’s a “highway to death and destruction”), Harvey makes no attempt to mince her words, which ring out as clear and as true as a bell.

It’s a fascinating insight through Harvey’s eyes into the locality, and feels as if we’re in the back of a giant old Buick, cruising through the streets, surveying buildings, and areas, and people, and the whole place is downright dilapidated and down-at-heel, but still there are tiny little glimmers of hope.

Then ‘The Ministry of Defence’ powers along and extinguishes any remaining little glowing hope-filled fireflies, in a brutal four minute visit to a bombed out government building, where nothing but an empty graffitied shell is left.

Harvey’s vocal ability to stretch and distort two syllable words makes this a very satisfying listen. ‘A Line in the Sand’ follows with super-high vocals and a really catchy chorus over a military kind of drum beat. It’s so maddeningly catchy that it almost distracts from the subject matter of thousands of refugees struggling to set up a makeshift camp, and Harvey’s observations of “a displaced family eating a cold horse’s hoof”.

‘River Anacostia’ starts and ends with an eerie reprise of a spiritual song ‘Wade in the Water’ and has a beautiful flowing quality which sounds almost hymnal. It’s a modern day fairy tale of a melody, but continues to ooze that dark underlying sense of unsettling misery and anguish.

With ‘Near the Memorials to Vietnam and Lincoln’ Harvey seems to have frozen a single moment in time in the minutest detail, with the ability to create vivid mental images of what’s happening in the vicinity.

Next up, ‘The Orange Monkey’, the third single released, continues with the theme of journeying and reiterates the way that the whole album has been shaped by the sights, sounds, tastes, smells and feels of far-flung explorations. The ascending ensemble of voices in this make it seem like a mountainous trek to a simpler time. It’s akin to being transported back to a land which has been unsullied by modernity, in desperate need of protection and preservation.

‘Medicinals’ takes things back to a dirtier and more unruly level, a sleazy, grubby start, before things mellow out again halfway through. The bluesy beginnings of ‘The Ministry of Social Affairs’ give way to a saxophone led exhortation of capitalist society and a repeated drone of “That’s what they want, oh yeah, money, honey” gradually becomes drowned out by the increasingly deconstructed sax.

‘The Wheel’ follows with playground clappy backing, a richly optimistic sounding melody, and then the musical antonym of those doom-laden and despairing lyrics. A photographically sharp image sears onto my retinas as soon as Harvey opens with “A revolving wheel of metal chairs/Hung on chains, squealing” and I can hear the screams of delight of the four little children who are whizzing round on the spinning relic of a decrepit fairground ride. And then it turns, the children disappear and a repeated answering voice to Harvey’s statements gives us the figure that they heard. There’s a degree of ambiguity around who the 28,000 are or were, but the fact that they’re gone is crystal clear.

Final song on the album ‘Dollar Dollar’ is a compellingly poignant tale of Harvey’s angst when a young boy approaches the car she is travelling in and begs for a small amount of money. The intro of Kabul street sounds lends an air of total authenticity to this eye-witness account. This is a beautiful and touching lamentation of helplessness. It sends shivers throughout, along with desperately futile feelings for all the destitute and disappearing people in so many parts of the world.