Hats Off To Flying Vinyl 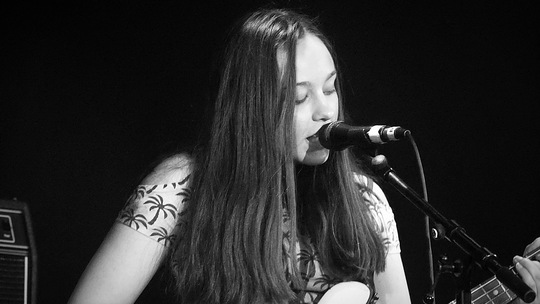 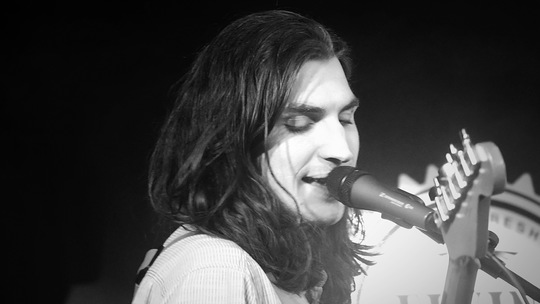 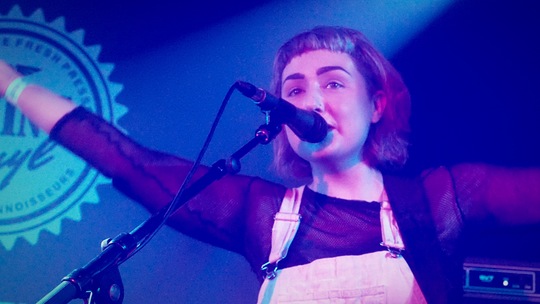 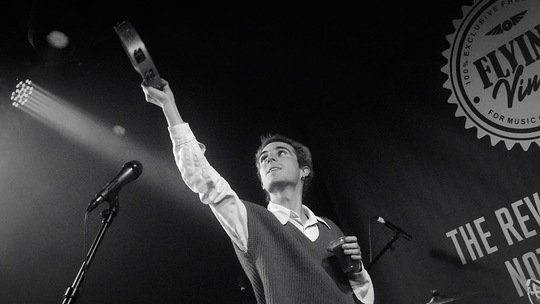 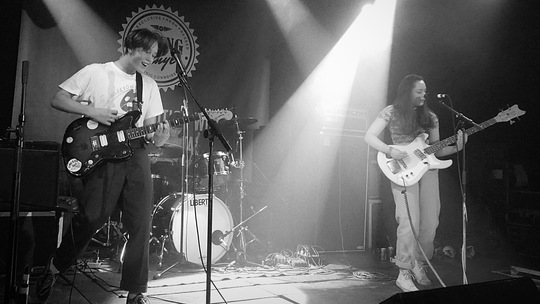 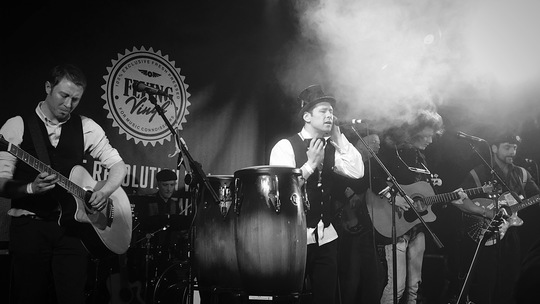 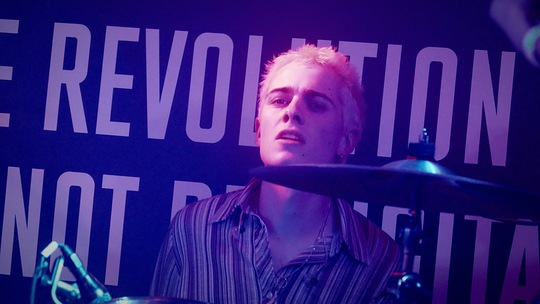 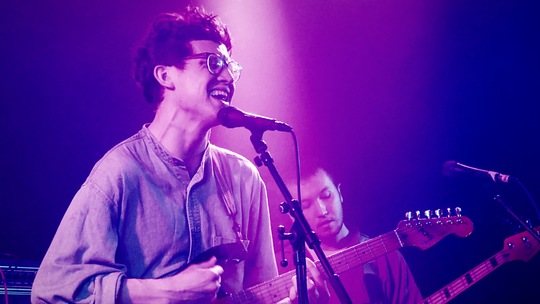 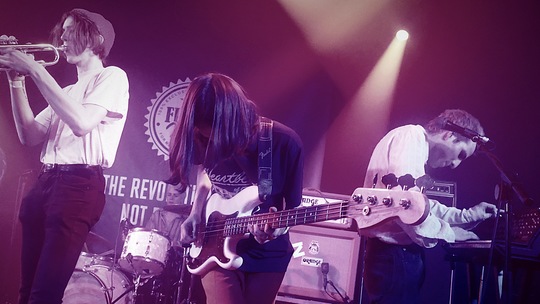 Flying Vinyl is a new concept still barely in its toddler years, but hitting all those important milestones very early, such a talented and advanced little gem of a baby!

Conceived following a moment of revelation involving a Fleetwood Mac record and born of a deep hearted desire to present music in an aesthetically pleasing and personalised manner, Flying Vinyl is a business dedicated to beautifully presented music and a shared discovery of the newest, juiciest sounds available.

For an idea still very much in its infancy, it was a hugely ambitious and bold move to put together a one day festival, showcasing ten (yes, TEN!) of the bands who’ve featured in the Flying Vinyl mail out boxes so far.

The all day event was billed as the world’s first festival for vinyl lovers, as well as an excuse to celebrate one year of Flying Vinyl releasing some of the best new music. With a line-up boasting some big names in the current music scene, headlined by none other than the fabulous Swim Deep (fresh from supporting Wolf Alice on their recent tour), this was looking like a must-see for me.

The full line-up from midday start to midnight finish went a little like this: Juice, Asylums, The Orielles, Yonaka, The Amazons, The Jar Family, The Magic Gang, Kagoule, Black Honey and finally Swim Deep!!

Upon arrival at the venue – Shapes in Hackney – it was clear that some serious amounts of organisation had occurred and that Flying Vinyl absolutely intended to make this a day (and night) to remember.

I went in just as Swim Deep were sound-checking and the first thing that struck me was the warm welcoming feel and the genuine pleasure of the team who were busy putting all the final touches in place. Sure, there were a few nervous moments with the sound check, and lots of high octane pre-gig apprehension. But from a glance around, it was clear that like-minded birds of a feather were all flocking together, all with one clear celebratory goal.

Other bands on the bill were just hanging around the perimeter, and there was an air of mutual appreciation, and a common love of what this day was all about.

I stopped at the bar for a while and had a little catch up with Asylums, top dudes who happen to hail from my home town of Southend. They reinforced my initial feelings of joy and camaraderie and were full of admiration for the way in which ownership of the music sent out by Flying Vinyl reverts to the artists after a three month period, and that bands don’t have to commit to signing their rights away in order for their music to be included in the collections. Asylums are a really lovely bunch of guys, unassuming and modest and down to earth and I walk away from our brief encounter very excited about seeing them play.

The doors open around 12.30 and it wasn’t too long before Juice hit the stage, all pure pop indie and bright lights of pink and blue and an overload of smoke. As festival openers go, this lot were pretty convincing and very damn cool, and it was hard to believe that it was still only just past breakfast time.

This band are all about the moves and all about the hair, and are a photographer’s best dream and worst nightmare all rolled into one (thank you to the very talented Kana Waiwaiku for the shots). Their fuzzy blend of seaside grunge and polluted pop managed to completely set the room alight.

As their set came to an end and I wandered out for a quick breather into the bright daylight, it dawned on me that there were still another eight sets to go and it was still only mid-afternoon. But I was determined to do my best for subba-cultcha.com so I was straight back stage front for the next band.

And oh my, I felt old for this one! Along with the fact that about 85% of the attendees were probably still at school or university at a push, The Orielles were all definitely young enough to be my children. In fact I would happily adopt all three of them, because as well as being super smiley, lovely people, they also played a superb set and looked like they were all born to make music. Effortlessly easy, their surfy garage pop sound really took my breath away, as did their brand new matching trousers.

The Jar Family were next in my list of festival highlights, partly for the fact that their band look is like something straight out of a Tim Burton film, partly because they made me a decent cup of tea at the point in the day when I was starting to flag a little, but mainly because they’re the only band from the whole day who were of a similar age to me.

As far as the line-up went, this lot certainly appeared to be the wild card in the pack, and some of the teenage clientele seemed a little taken aback at first. However the crowd were soon very much won over by their dishevelled brand of shambolic folky ramblings. Kudos to the organisers for having the self-assurance and confidence in their musical choices to come up with an outside bet that paid off.

The Magic Gang played next with a frenzy of excitement from the youths at the front, this was clearly a popular choice and met with huge appreciation. Kagoule, another youthful band, who exhibited a weird mix of resentment and haughtiness, nailed a blinder of a stomping set, and looked very comfortable playing out the material from their new album.

Almost at the end of a very hectic day, I took the opportunity for some hanging out time with the lads from Swim Deep prior to their headlining slot. I couldn’t have met a nicer group of people, they were all incredibly accommodating, and I was even allowed a little go on one of their guitars, a beautiful shade of pastel blue which put me in mind of Iceland’s blue lagoon.

There was something about this band that just exuded eminence, but despite that, they were all happy to chat and have a joke whilst waiting for their set time. I talked mainly hair, fashion and my over-riding impression of them all as being a modern day take on the cast of Trainspotting.

Swim Deep’s set from start to finish was immaculate, and received a well-deserved and rapturous reception. Moshing, crowd surfing, the briefest of stage invasions, a crazily effective confetti canon and piles and piles of fun. I loved this set, and the last song of the night ‘Fueiho Boogie’, which seemed to last for about 15 minutes, was a beautiful end to an amazing day with a whole load of lovely new friends (and adopted children!).

Hats off and all the love for Flying Vinyl for not only pulling this off, but for doing it with such aplomb and exhilaration. Can’t wait for the next one!!

Thanks to everyone for this great experience and thanks also to Siobhan of 16beasleystphotos.wordpress.com for the additional photos.