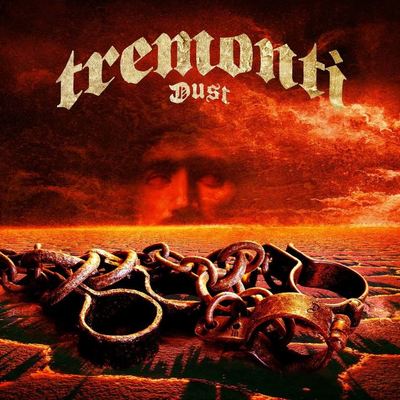 The overwhelming collection of possible singles offered out through Tremonti’s previous release, ‘Cauterize’, was incredibly impressive. Listening to their third album to date however, would not shock those who knew the continuation was created during the same recording sessions but does not necessarily denote that the new addition is simply superfluous. In fact, Tremonti’s chug-suffocating ‘Dust’ may never settle.

Solos have always been considered a favoured method included in Mark and Eric’s writing style with notable instances blanketing his career. ‘Dust’ does not differ from that highly held tradition but initiates a trial by fire as they test just how far he can take their technique, composing righteous rock in its very definition, each song metaphorically quarreling over who will take the proverbial throne.

“My Last Mistake” opens the LP to an amalgamation of open palm and gut wrenching muted chugs, following similar rhythm patterns that are unrelentingly recognizable of their second album. Mark’s soaring vocals however, continue to prove their proficiency as his strong vibrato burns blisters over the listener’s ears, with his combination of gritty grunge and the twang of American robustness.

Samples of Wolfgang and Garret’s weighty accompaniment enhance the content tenfold with dependable double kicks weaving into the infuriated bottomless bass, adding the crucial kick that anchors the melodies and delivers the maniacal behemoth element.

A rapid modification called “The Cage” however, turns its back on this level of similitude by galvanising a fresh outlook of the bands abilities by not only upping the tempo, but fabricating a new wave assault that holds a catch exceedingly difficult to ignore.

Exemplifying Mark’s singing at its emotional and technical heights, title track “Dust” cuts back on instrumental during its shallow verses, leaving the front man in a ballad situation that could spawn a vulnerable moment for questionable vocalists but instead, converts the tone of the album to make this the most dramatic track of the ten piece.

A strong catalyst inciting mayhem would also have to be awarded to “Catching fire”. Opening on a gurgling guitar feedback which transforms into a driving force of smoldering crescendo choruses, epitomizing the strong hooklines that the band have effectively used throughout ‘Dust’, as well as over the course of their existence.

Tremonti maintain the capability of surpassing what the public thought were their ingenious limits and with no lull identified, the arguing innards of ‘Dust’ will have no choice but to bask in the glory together.