From Sorrow To Serenity

'Remnant Of Humanity' Ground Into Gravel 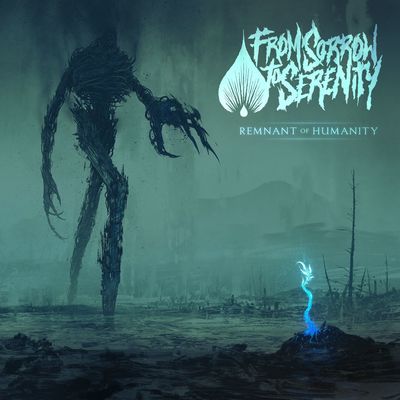 From Sorrow To Serenity

From Sorrow To Serenity’s unveiling in 2013 had led to some brisk scaling of the success ladder, leading swiftly to the release of their debut album three years later. ‘Remnant of Humanity” is not to be mistaken with a sound that has never been heard before, but the Scottish quintet have an attention for detail which examines the genre and personifies it in an exemplary manner.

The construction of their haunting crescendos become a repetitive feature that entail sinister motives and pummeling summits, all circulating a technical system of intricate riffs, synthesizer appearances and blood boiling bass that Andrew Simpson wields with a governing authority.

“Hellbound” rains down hell-fire with a dedication for destruction. The impact of each verse shreds any potential for purity as Kieran Smith repeatedly beats down hard on the listeners ear drums, inexorably tipping the scales in favour of its immense nature.

“Illusive” contains intermittent razor-sharp notes that perpetually grate against the thin threads of sanity, episodically engulfed in hard-hitting lyrics, produced from the merciless vocal firing line of Fraser Smith and guest appearance of Scott Kennedy (Bleed From Within).

The concluding track to the LP includes the short but intimidating roars of CJ Mcmahon (ex vocalist for Thy Art Is Murder) adding to “The Way Back” what most at this stage would not think possible, which is an ultimately heavier sound that borders on the opening soundtrack to the gates of hell themselves.

“Remnant of Humanity” is either From Sorrow To Serenity's personal take on the current state of global public affairs or is simply in relation to the sweat-soaked aftermath that would follow the release of their debut. Regardless of whichever account holds water, the conclusion would be met with an identical train of thought, leading to detailed elaboration and eager anticipation.