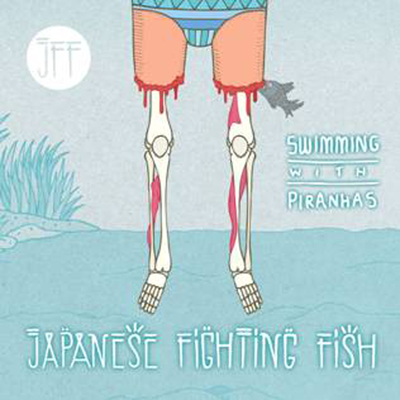 Japanese Fighting Fish, the Leeds rockers who're preparing to release a whopper of an album! The third release from the band was recorded at Air-Del studios in London with the grammy award winning Tim Young. The album plunges you knee deep into gritty riffs and pulls you out again with soaring vocals from front man Karlost.

The band are being supported by BBC introducing, which stands them up with some of the greatest acts this generation has seen. Their latest single from it, ‘For Queen Marilyn’, was written spontaneously after arriving at the studio and being asked for “anything” to check sound levels. From that the Queen was born!

Right from the start an ominous riffs kicks it off and develops into a grunge explosion. The band have combined parts of indie rock, rock and grunge to create their own personal sound, embodying bits of each to create something entirely unique to them. I hear a lot of influence from bands like Royal Blood and Red Hot Chilli Peppers, within these guys, who are legendary within their own right.

This album is not just technically amazing, and beautifully written it's got so much charisma and wit about it. These guys put on a cracking live show, just check them out on YouTube, described as 'alternative rock meets theater', it's certainly an interesting experience.

My favourite tracks from the album are 'U ain't gonna win this' for it's contagious bass and comical video, and underground grungy vibe, but 'Dr No Sense' is a combination of a heavier sound and it works fantastically for them.

Overall the album is a strong release for the band who just keep growing and growing, and rightly so they have so much potential, a plethora of personality and a unique sound.