Groezrock is an annual music festival that takes place in Meerhout, Belgium. It started out as a small rock and pop...

Europunx Go In Hard At Groezrock 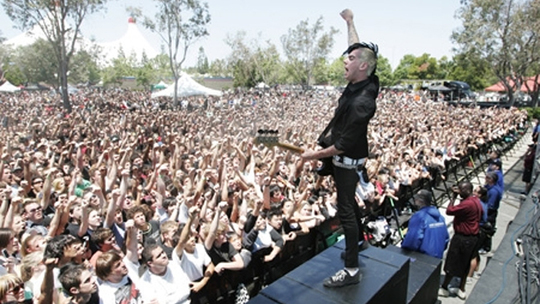 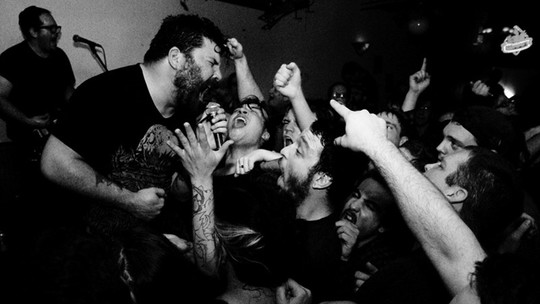 The 25th edition of Groezrock festival in the quiet Belgian town of Meerhout hadn’t gotten off to the best start. Missing sponsors had forced a downsize, and shitty weather and long queues had left us with dampened spirits.

By the time we got past the ticket barrier the first band we were able to catch was Muncie Girls. They instantly changed the mood. Their catchy hooks and upbeat, poppy riffs were met with the kind of reaction usually reserved for far more aggressive bands.

Over on the main stage Less Than Jake kicked off a tried and true ska-punk set. What they do, they do well. Unfortunately what they do now is largely predictable and inoffensive. Frank Turner was initially met with a somewhat confused reaction, though around the time he got his tour manager to crowd surf around the tent he’d won almost everyone over with his usual solid performance.

Rancid were the Friday night headliners this year. At this point in their career they know exactly what they’re doing as they powered through their classic album 'And Out Come The Wolves'. Their solid sing-along choruses had the whole crowd partying, though in between them, there was almost an awkward wait for the next bit everybody knew.

Saturday was kicked off on the main stage by Not On Tour who put together a solid set of Bad Religion-esque skate punk. Rozwell Kid were one of the most talked about bands of the weekend, and rightly so, lacing every song with fiery solos but without being dicks about it.

Frank Carter and the Rattlesnakes thrived off of the lack of barriers at the show, climbing up and diving off the pillars holding up the tent. At the end of their set frank was stood atop a stage invasion screaming ‘I hate you’ at everyone in the room. It resembled a scene from a modern day renaissance painting as a sea of hands reached out to hold him high above the crowd.

There were a lot of high expectations around the return of The Movielife. None of which they lived up to in a frankly boring set. Modern Baseball on the other hand played one of the most fun shows of the weekend, as they always do.

The Mad Caddies showed off how much better ska-punk is when you actually pay more attention to the ska-side of the music, and don’t just play punk songs with upstrokes and trumpets.

Pup played one of the best sets of the weekend to an incredibly wasted crowd on the smallest stage. Their upcoming album is definitely set to make waves.

The final band of the weekend was Sum 41. After Deryk Whibleys recent troubles and the return of Dave ‘Brownsound’ Baksh many people didn’t know what to expect, but they were on top of their game, rifling through hit after hit across all of their albums. They hadn’t quite seemed to work out how to have the 3 guitarists sharing the limelight on relatively simple songs with Tom Thacker and Dave Baksh taking turns at the front of stage. Despite this the set seemed over far too soon, and left everybody eager for their next chance to see them.

Overall the festival itself had all round good vibes. People were there for the music first and to get fucked up second. Around the campsite music came from all directions. Portable speakers, acoustic guitars, and a capella renditions of the Game of Thrones theme tunes and the eternally catchy "Nobody Should Be Wearing Pants Today". So even by the end of the weekend when you feel like shit, it still felt pretty good.