Live at Leeds is a music festival that takes place across various venues in Leeds, England, on the weekend of the May...

Living It Up At Live At Leeds 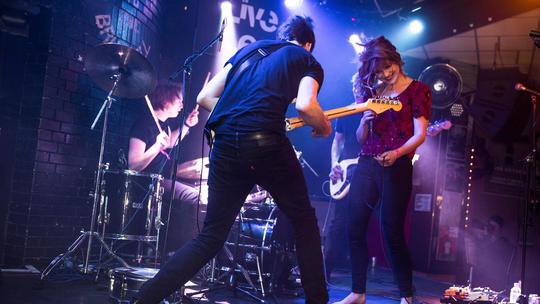 Leeds is home to an envious variety of venues – from the likes of the first direct Arena, O2 Academy and Leeds University Union (where The Who’s Live at Leeds album was recorded), to smaller, more intimate venues, such as the prestigious Brudenell Social Club.

A day rarely goes by without live music taking place somewhere or another, be it well-known acts or local bands (the music scene in Leeds is worthy of boasting about). So, once a year, when the city comes together for Live at Leeds (a play on The Who’s album no doubt?), great things are to be expected.

First taking place in 2007, as a celebration to mark the city’s 800th birthday, the festival has grown substantially since then. In it first year, five stages welcomed 1,500 attendees; this year, 23 stages accommodate 6,250 visitors – with 186 acts performing.

Kicking off at midday on 30th April, the impressive line up promises to deliver, with Jess Glynne, Circa Waves and Corinne Bailey Rae as headline acts alone. The first point of call for the day is the first direct Arena to pick up wristbands. Whilst no live performances will take place here, as Live at Leeds continues to get bigger and bigger, it’s possible that in future years it’ll become the festival’s centerpiece.

Leeds city center is always thriving on a (mostly) sunny Saturday, but today is different. A stage on Briggate, the city’s high street, provides free live music throughout the day for all. The ambiance it adds only goes to show the lengths to which the festival organisers go to make Live at Leeds such a grand affair. And it’s not all music orientated. Given that many of the venues double up as popular bars, there’s plenty to eat and drink besides watching live entertainment. Thus, a trip to Belgrave Music Hall + Canteen’s roof terrace is in order to check out the schedule of events and plan the day ahead.

Of course, the downside of having a festival spread across the vicinity of the city center is that it’s not always possible to make every act – but with such a diverse line up, it’s never entirely disappointing when this happens. Patience and a good pair of shoes for walking are essential. Another downside of the day was the fact that chart queen, Jess Glynne, pulled out of her headline slot hours before she was due to perform. It was a strange sight to arrive at an empty O2 Academy and have the bad news broken. But, alas, little could dampen spirits today – except the intervals of rain.

Stand out performances came from Welch band, Estrons. Playing Brudenell Social Club’s DIY Stage, they played for an enchanting half hour set. Given the nature of Live at Leeds, with people coming and going throughout sets, the band drew in quite a crowd.

Singer Tali’s powerful vocals, relentless drumming and hypnotic riffs proved that Estrons are, without a doubt, a band to watch. Even when the band announce they’re going to take things down a notch, with the self-described “slow and emotional” ‘Java’, the pace is still brutally quick. It’s the band’s first performance in Leeds, and they manage to make a lasting impression. They play infectious songs too – with the punchy ‘Make A Man’ becoming fully ingrained in the head for the duration of the day.

Other highlights of the day come from London four-piece, Inheaven. It’s widely noted that they have a fan in The Strokes’ Julian Casablancas, but this should not be used to define them. Playing Leeds Beckett Union’s Stage 2, the crowd is packed out for what is a mesmeric show.

Sonically, the set list is diverse – with razor sharp riffs at times and hazy drawl at others. What is consistent, though, is their cool stage presence and ability to play together with ease and precision. It should also be noted that the band’s get up is a vision of flares and silky shirts. The crowd remains fixated on the performance throughout, with cheers directed at Inheaven throughout the set. More well-known songs like ‘Regeneration’ muster up an air of familiarity, but what is clear is that Inheaven are a band to keep an ear out for.

Returning to where the day started, Haelos (pronounced halos) take the stage by storm at Belgrave Music Hall + Canteen. Providing dreamy harmonies and atmospheric synths, they are a welcome act to draw the day towards a close. One of the downsides of the performance, however, is that the sound in the venue is slightly askew at first, but this is quickly amended. Sticking around at Belgrave, Formation make for an energetic performance to conclude the festival. Think: cowbells and a lot of dancing.

Though officially over, the festival continues with the after-party at The Wardrobe. It’s little details and extras like this that prove Live at Leeds is an affair not to be missed.