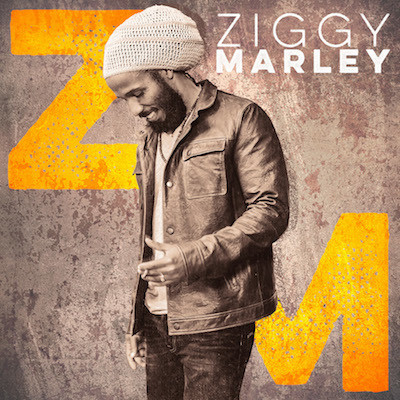 Ziggy Marley lives in the colossal shadow of his father Bob Marley. Despite consistently making music since 1984, featuring in the US Billboard charts and winning Grammies, he's not really had any mainstream success in the UK. His self-titled eighth solo album, doffs its cap to traditional reggae that would make his father proud.

The album boasts 11 tracks of socially conscious, revolutionary, anti-war tunes with the odd love song thrown in for good measure. Well, philanthropy is tiring and depressing, so you need something a bit more uplifting every now and then - we can't all live in constant gloom a la Adele.

Fourth track 'Heaven Can't Take It' features his brother Stephen and is more acoustic with a Latino feel. Raspy vocals question why people kill people; for money, power, religion or colour and heaven just can't take it no more.

The follow-on track 'Butterflies' reminds me of the reggae explosion of the early 90s when Red Dragon complimented us on our kiss and Inner Circle made us sweat. Except Ziggy is telling us that only love can win the war.

'Love Is A Rebel' is much more up my street. It has 70's keys and a pulsating rhythm that gets you dancing round the room. This track is a lot grittier than its predecessors and successors. And it feels a lot more contemporary, despite smatterings of retro.

The track 'Marijuanaman' for me is bitter-sweet. It took me back to when I was growing up in West London. I would pass cars, shops, market stalls and guys walking down the road with huge ghetto-blasters on their shoulder playing music that sounded exactly like this. For this reason, I loved it. On the other hand, it's so stereotypical and trite, I was face-palming at its unoriginality.

In a nutshell, that's the problem with this album. Unlike his little brother Damien - who revitalised the genre in the mainstream with 'Welcome To Jamrock' - Ziggy lacks that killer hook, anthemic chorus or infectious bass-line. It's a pleasant listen, well-produced and has an important message - but it's a bit too diluted. Instead of punching you in the face, grabbing you by the shoulders or gently caressing you, it gives you a wet fish handshake.

Ziggy - real name David - gave himself this moniker as he was a big fan of David Bowie. However, this album is missing the innovation and artistry that Bowie pioneered. It's a standard, paint-by-numbers reggae album. And when I prefer this genre a bit more Trojan Soundsystem, it doesn't really hit the mark.