Good Luck And Do Your Best

Gold Panda Does His Best & It's Good 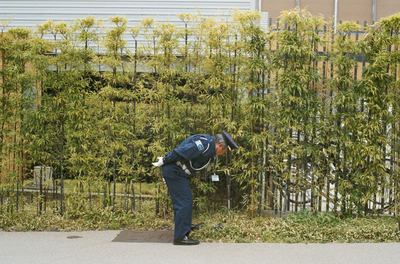 Good Luck And Do Your Best

If there's one thing us Brits are good at, it's electronic music. From The Prodigy and Massive Attack, Bonobo and Four Tet, Squarepusher and Aphex Twin. Even Thom Yorke dabbles. Basically, we all love fiddling with knobs. Gold Panda's fourth studio album 'Good Luck And Do Your Best' proves the genre is far from saturated and out of ideas.

Even though it was recorded in Gold Panda's home town of Chelmsford, all 11 tracks are inspired by his time in Japan. Starting at the top, the title comes from a taxi driver's parting words of "good luck and do your best", which is a broken English translation of Japanese phrase "ganbette, kudasai".

Wanting to step away from the traditional album format, Gold Panda set about making something that's as much a feast for the eyes, as well as the ears by taking photographer Laura Lewis with him. And although I've not seen that part yet, this album takes you on a sensory journey without it.

Opening with 'Metal Bird', this trippy, blippy and sound-scapey tune is the perfect introduction. As female vocals repeat the word bird throughout, you become entranced.

Third track 'Chaniba Nights' takes its name from the peninsula state just outside Tokyo known for its agriculture and industry. Despite being named after the Japanese equivalent of cultural wasteland Milton Keynes, it has a modern yet 90s dance feel to it.

'Song For A Dead Friend' and 'I Am Real Punk' have a nod to Japanese folk music by using a gottan and what sounds like Sumo wrestlers saying "hai" blended with Atari video game nuances. My favourite track is 'Time Eater' which uses temple bells with phenomenal effect.

I really like this album. My only criticism is the tracks are a little too long, so you lose interest before the end. However, its strong direction perfectly fuses historic Japan with its futuristic present - representing the country perfectly.

This will be played in super-trendy bars and sushi restaurants in [insert hipster area here]. It sits comfortably with ambient trip-hop contemporaries and will be the album your muso friend who's too cool for school will be banging on about... not me though, as I just used the phrase too cool for school, automatically making me uncool.