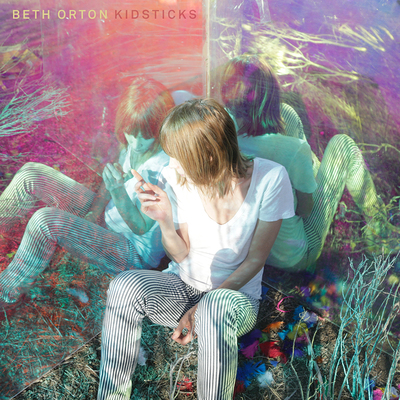 Beth Orton is one of the best singer songwriters in the world. However, artists like Ed Sheeran and PJ Harvey have stolen her thunder. I forget how awesome she is until I hear one of her albums and her latest offering, 'Kidsticks' is no different.

The 10-track album is released on 27 May and is her seventh offering since her début in 1993. She kicks off her mostly mono-titled ride of high-jinx, alt-folk with 'Snow'. It immediately reminds you of Orton's sagacity with a massive injection of verve (the noun, not the band).

As a writer, I live in my imagination and translate everything into scenarios. This whole album transports me to a misty wood at sunset with rays of light piercing through branches to bleach patches of foliage. Pagans dance barefooted through trees and shrubbery wearing white and masks of woodland creatures before taking tea in the makeshift dining room made up of shabby vintage furniture dotted around the copse. It's just sugar in the tea, honest! Hopefully, that's given you an idea of what this album is - however, there's a lot more to it than fantasy.

'Moon' is an ambient, electro hymn with eerie guitar rhythms juxtaposed against playful synths and staccato percussion. The poetic, existential lyrics about only seeing the world through moon light and the hope of once again feeling the sun due to the bright light someone brings. Beautiful, ain't it?

Then we move to 'Petals', a track that wouldn't be out of place on a Cocteau Twins or Massive Attack album. Her ethereal vocals echo through the shoe-gaze soundscapes before it crescendos into an ecclesiastical rave.

'Wave' has more of a Florence and The Machine take, but less epic. Her vocals have gone from little girl, to husky woman as she pleads for a lover's attention. In this, she manages to make panpipes sound edgy.

This is just a taster of the eclectic, experimental and emotive aural expedition Orton takes you on. No two tracks are the same, yet they fit together seamlessly. Bound together only by soul. It's this reason I've not pulled out my favourite track, each one has a hypnotic quality that can't be ignored.

If I had to choose, it would be 'Corduroy Legs', not just because of its crackpot title, but because of its use of a theremin. The spoken word in this dreamy space interlude pulls together sounds from nature with philosophical reminiscing.

Ending with title-track 'Kidsticks', the incessant tapping on what sounds like milk bottles is akin to a ticking clock, leaving you in sweet reverie for the final time. This is an apt ending for an album that brings you closer to the thing that matters the most; nature - both human and environmental.

Her music has been used in Charmed, Dawson's Creek and Greys Anatomy, so a lot of it is recognisable, even if you don't realise it's her. However, Orton is one of the most exciting, unique and cerebral artists of our times. And this album proves it.