Seal the Deal and Let's Boogie 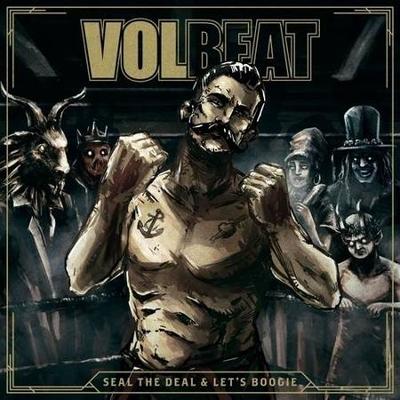 Seal the Deal and Let's Boogie

With a title like 'Seal the Deal and Let's Boogie', you might think Volbeat were planning to aim for Status Quo's crown rather than the Devil's bleeding one. In fact, as the album cover suggests, the title track is using 'boogie' as a euphemism for fight, so it's more complicated than that. There are still danceable rock songs, along with a few songs to let out aggression (as well as the title track, 'The Loa's Crossroad' is all kinds of heavy), but those are by no means the only avenues explored on the album.

Once again, Volbeat's love of history finds expression, with one song dedicated to Mary Jane Kelly, the last victim of Jack the Ripper, and one celebrating renowned voodoo practitioner Marie Laveau, which has a chorus that will probably make the casual listener think it's just a standard song about some woman who caught the writer's eye, but the lyrics actually repay closer attention. It's not the first time Volbeat have done that, as anyone who looked up the back story about Lola Montez will know.

However, the most striking feature about this album is the attention paid to how it will sound in big venues. This is undoubtedly the sound of a band with ambition. Many bands are trying to come up with the modern answer to the stadium rock sound. However, given that Rob Caggiano says Eddie Van Halen is his all time favourite guitarist, at least Volbeat's take on it in songs like 'You Will Know' (for which Caggiano had a lot of input, according to Poulsen) sounds like they're doing it from the heart rather than to chase a quick buck. The hard and fast sections to get the mosh pit going are still present on this album, but in between, there are interludes where the rhythm adopts an almost Def Leppard-like simplicity and you can tell that the focus will shift to generating crowd response when they're on stage. 'For Evigt'/'The Bliss' (very thoughtful of Volbeat to save collectors' money by including both versions of this song on the album) is a case in point, where soaring vocals meant for an audience to join in provide a surprisingly effective foil to a banjo-led section. The shining example of a song designed for singing along, though, is secular hymn 'Goodbye Forever', where the Harlem Gospel Choir pitch in to super-size this paean to making the most of life.

For all Volbeat love to stick their noses into history books, however, their stance on rock history causes them to come a cropper a few times on 'Seal the Deal and Let's Boogie'. It's always risky for a modern band to have a track with the same name as a well-known song or album by a classic band, and Volbeat have done both this time. 'Black Rose' they just about get away with as it has a catchy refrain any rock crowd will sing with gusto. It also doesn't sound remotely like Thin Lizzy, although the title track has echoes of 'Thunder and Lightning'. 'Gates of Babylon' is on shakier ground. Same spooky Eastern influences, same evocation of the deadly sin of lust, but Rainbow are part of the Pantheon of rock and few people can touch them, so of course Volbeat's effort suffers by comparison. As well-known Dio fan Jack Black might say, this is not the greatest song in the world, this is a tribute.

The worst blunder on the album, however, is Volbeat's decision to cover the Georgia Satellites' 'Battleship Chains'. Whatever possessed them? The original hasn't enough depth to moor a dinghy, let alone a battleship. The only way it could be made interesting as a cover, therefore, would be a complete stylistic departure. Volbeat are not the band to do that because their own style contains a heavy dose of Southern rock influence. Instead, their version is so faithful as to be unnecessary.

So there are a couple of tracks to skip, but then, the same could be said of some classic rock albums back in the day. Queen, for instance, often threw in a couple of fillers too, but that doesn't make me regret any of their albums I've purchased. Overall, there are more than enough meaningful songs, feats of prowess (especially noteworthy guitar soloing can be found on 'Let it Burn', while new bassist Kaspar Boye Larsen shows off his chops on 'You Will Know') and great melodies to make this album appealing. Just as well, so you can learn the words before they announce dates. Some albums demand to be heard; most of this one demands to be seen.