Let's Go On A 'Misadventure' 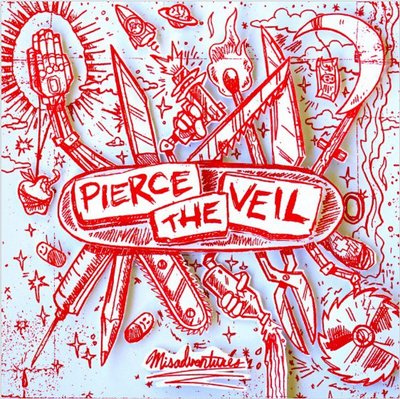 San Diego based band Pierce The Veil finally released their forth studio album ‘Misadventures‘. After the success of 2012 album ‘Collide The Sky’, in the last four years the band have been touring the world and playing phenomenal shows, as well as gifting us with this album.

‘Misadventures’ features 11 tracks, the first 3 of which were pre-released, and ‘Dive in’ is definitely more explicit than what PTV fans are probably used to.

‘The Divine Zero’ was released in 2015 building fan anticipation, and they certainly weren’t disappointed. The new album shows the band grow in their technical ability and growing in their own unique sound. This band are special, in a way I can’t put my finger on, maybe it’s the mix of such gentle delicate lyrics combined with their sound, or the unique seamless blending and layering within tracks.

The band have been described as emo infused post-hardcore, but I disagree, the sound and tracks they’ve created can’t even be put into two genres, it’s so personal to them.

‘Bedless’ is not something I’d of expected from the band, and is significantly less heavy than the rest of the album, with a more pop punk esque sound. But if you less into the album in full blends very well with ‘Circles’

‘Circles’ was definitely my favourite track of the album, and my god is it catchy. Overall the album explores a new era of Pierce The Veil, I think it perfectly illustrates the growth this band have made in the last four years, and is a great follow up to ‘Collide with the sky’ I can’t wait to see what’s next for this band.

What’s your favourite Pierce The Veil song?
Good news for UK Pierce The Veil fans, they’ll be returning to the UK this winter for a ten date tour, they’re definitely not one’s to miss!