<p>The Dot to Dot Festival is an annual music festival held at various venues in Nottingham, Bristol and Manchester...

Nottingham's Own Shine Brightest In A Day Of New Music 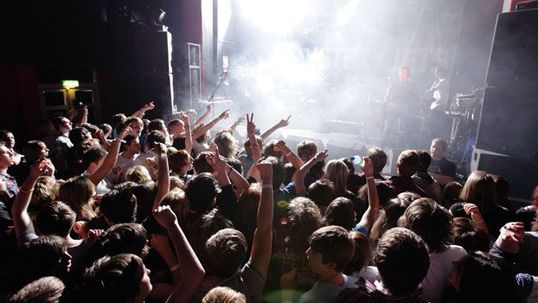 So it’s that time of year again. The best new bands and a few old faces descend on Nottingham. Although the line-up isn’t as phenomenally mind-bending as years gone by, there’s still more than enough to see.

This writer’s day begins with Babe Punch at Rock City. Despite the afternoon sun beating down outside, Rock City’s main room looks and feels like midnight; it’s dark, cool and busy. In fact, it’s very busy for this local group who plough through an explosive half-hour of grunge-tinged pop-punk, veering away briefly to cover The Cure’s “Just Like Heaven”. They’re exceptionally fun, incredibly young and stink of potential. Babe Punch – remember the name.

Having obtained mild sunstroke in the thirty-second walk to Rescue Rooms, I recover with a sensational pint of Magic Rock Contortionist before popping over to catch the highly-tipped Barns Courtney. If you like middle-of-the-road blues, then Barns Courtney is for you. If not, stick it out with a pint in the summer sunshine.

Shortly afterwards, American indie-rockers Day Wave also take to the Rescue Rooms stage. Their breezy indie-pop is perfect festival fodder, receiving more shoulder shuffles than the average mid-afternoon act. It says something, however, that their cover of New Order’s “Ceremony” is comfortably the best song of the set. But then again, there aren’t many bands who have written a better song than ‘Ceremony’...

This writer then heads over to Spanky Van Dyke’s to catch New Desert Blues. Immediately, they sound like The National – all tension-building climaxes and faux euphoria. It goes without saying that they are not The National, nobody ever will be, but it’s enjoyable nonetheless, and a busy Spanky’s would suggest that this opinion is a common one.

Moving on, this writer wants to hear some more local sounds so is drawn back to Rescue Rooms to catch the bombastic Eyre Llew. The immediate, easy comparison is Sigur Ros. It’s a lazy, tired comparison but one that I’m going to make all the same. They make an awe-inspiring noise, as thunderously-loud as it is beautifully eerie. Rescue Rooms is busy and you can tell why – Eyre Llew are destined for good things.

Carrying on at Rescue Rooms, Diet Cig deliver half an hour of excitable indie rock. The likes of “Harvard” and “Scene Sick” demonstrate their penchant for tongue-in-cheek social commentary and the set plods along pleasingly. It always seems as if there’s something missing, however, and that certain something is a rhythm section. Despite Alex Luciano’s energetic guitar-playing, the sound never seems ‘complete’ and that’s a shame, because Diet Cig’s songwriting hints at greatness.

Sadly, the rest of the evening holds a fair few clashes: Night Beats, Spring King and Liss all play at similar times on different sides of the city. Instead of being the mature adult and sacrificing one or two in order to fully enjoy another, I try and flit between them all and make a right pig’s ear of it. It’s not a game-changer, no, but it’s a bloody shame. Mental note: do better next time.

Anyway, I eventually make it to Bodega to see the sludgy psych of Baba Naga. It’s stunningly loud and looks to be a perfectly messy ending to proceedings... until secret guests, and local boys, Crosa Rosa give everyone’s ear drums one final bashing with their doom-laden grunge.

And with that, another Dot To Dot draws to a close. The line-up certainly isn’t the strongest it’s been, but it’s impossible not to have a good day out. And as if it needed confirming, the day has shown that the Nottingham music scene is as healthy as it has ever been.