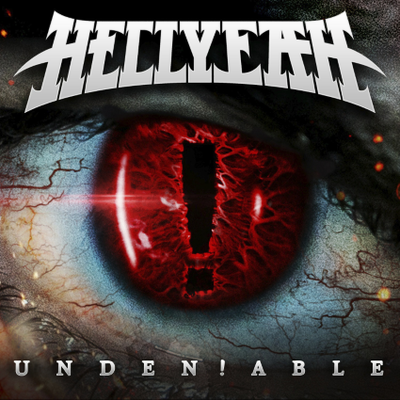 According to Vinnie Paul, being undeniable means not letting other people's opinions confine you, either in the sense of being pigeonholed or deliberately avoiding something you want to do for fear of being labelled. It's a good title for Hellyeah's latest album as they venture further and further from what you'd expect.

After starting off as a somewhat crass party band for the patronising stereotype of metal fans as portrayed in the media, Hellyeah realised years before politicians on both sides in their native land that the grassroots didn't feel like partying any more. Their last album 'Blood for Blood' therefore marked a drastic change of direction to focus instead on popular anger. Now the band that reinvented themselves as the unthinking man's Slipknot have come close to turning out a concept album, because almost every song on 'Unden!able' is about fighting. There's civil unrest with the very straightforward 'Start a Riot', which promises to do exactly what it says on the tin live. Then there are tales of violent private vendettas like 'Scratch a Lie' and 'Blood Plague', both of which also show Vinnie Paul's monumental drumming at its finest. The struggles Hellyeah have faced as a band naturally loom large in the title track, as well as in the made-for-circlepits opening salvo 'X'. Finally, battles with one's demons are highlighted in 'Human', which is slower than Hellyeah's usual output, but still much more energetic than you'd think from the advance press describing it as their version of a power ballad.

In fact, if you're wondering what a Hellyeah power ballad would sound like, there are two much more likely contenders on this album. Just when you think you know what to expect next while listening, those two slower songs creep up and catch you out again. One is even about love, which really isn't typical Hellyeah territory, although 'Love Falls' is a twisted tale of a disastrous love life. It also heavily features orchestral elements, which crop up on a few songs dealing with emotional turmoil (mostly violins, an association famously mocked by Pantera in 'Walk').

The other, however, will probably be of much more interest to those who've been following Vinnie Paul's career ever since Pantera. Apparently, Christian Brady suggested that Hellyeah cover Phil Collins' 'I Don't Care Anymore', only for Vinnie Paul to remember that he and Dimebag Darrell had had a go at that song in their Damageplan days, but ended up not releasing it. After a bit of searching and a lot of technological tinkering, Dimebag's part was incorporated into Hellyeah's cover. As it builds to a climax, if the hairs on the back of your neck aren't standing up, check your pulse.

If you're looking for something deep and meaningful, 'Unden!able' will not be for you: even with all their changes, Hellyeah's output still contains more profanity than profundity. On the other hand, if you just want to mosh to something loud and aggressive, you'll find that Hellyeah's latest album still has balls, volume and strength.