At The Throne Of Thrash 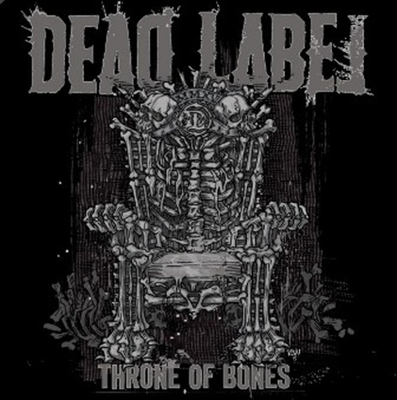 Game of Thrones may be ubiquitous at the moment and fans are flocking to the filming locations in Northern Ireland. Further south in the republic another throne emerges and it's as loud and terrifying as anything in Westeros.

'Throne of Bones' is Dead Label's second album, building on the thrash formula of the first. The three piece retain the fast and heavy guitars, double pedaled percussion and death growl style but now take a few (but not many) tentative steps into wider rock territory.

From the opening title track the record blasts through blistering guitars and screams with no space to get your breath back. The lead song 'Salvation in Sacrifice' may start acoustically but it's soon succumbing to thrash and growls. 'Ominous' is as dark as the title suggests.

'The birth of suffering' begins as if respite is coming but it too turns to the depths and now the cymbals really come to the fore, countering the searing guitar play and the bass that picks out the themes.

And suddenly, a lull. 'The Cleansing' may be one of the most appropriate titles in the history of metal. A soft instrumental just a few minutes long. None of your ballads or lighters aloft nonsense, this is a genuinely beautiful interlude. This is the eye of the storm though, it's not over yet.

'Exhume the venom' shreds your ears from the beginning. This is my stand out track, the guitars are layered to create a relentlessly heavy track with a central message of revenge.
'Void' continues the grind deeper, but it's the final track that shows a possible new direction.

Opening with a piano and introducing a staccato guitar riff this is an epic nine-minuter of a classic rock construction and that's just fine with me. Abrasive vocals still apply but there are guitar breaks, that piano accompaniment and a false ending that reach out wider than anything heard yet. The 23rd Psalm is screamed out before that false finish and the piano picks up again. It may seem as if I've walked through the valley of the shadow of death, but the other side is worth the walk.