Vinyl Pop For The Digital Age 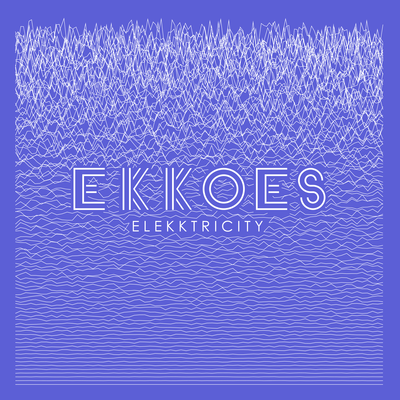 Ekkoes are a three piece band from London whose album Elekktricity is a slice of vinyl 80s pop for the download age.

The first track ‘Last Breath’ channels Erasure era Vince Clarke with its insistent beat underpinning a catchy melody and muscular vocals that carry you along on a tide of euphoric pop. The following track ‘Fight the Feeling’ starts off with an unmistakable Yazoo style electronic riff before Dave Gahan style vocals take you into ‘Some Great Reward’ territory.

Despite not being born when the artists they are influenced by were at their height, Ekkoes are clearly totally immersed in the era and, although it is great fun playing spot the influence, they never lazily appropriate the sounds. Their ability to make you feel as though you’re hearing a half forgotten classic is uncanny but their real strength is that the songs are just superb in their own right.

‘You Just Walked Away’ and ‘Heaven’ are more reminiscent of American style New Wave tracks with a definite Belinda Carlisle vibe. ‘Couldn’t Miss You Anymore’ is a dreamy track with an OMD synth style backing that just draws washes over you. ‘Ice Cold’ is a Duran Duran ballad sung by Glenn Gregory of Heaven 17 with the strengths of the former’s ear for a crowd pleasing tune and the latter’s brilliant voice.

It seems almost unnecessary to throw in a cover version after all that, but they come up trumps with a gorgeous version of ‘Self Control’ originally sung by Laura Brannigan. The next four tracks draw their influences from the iconic Pet Shop Boys amongst others and, while listenable, are not quite as immediate as the rest of the album.

However the final track ‘Thousand Suns’ brings the album to a satisfying close by being perhaps the closest to the Ekkoes sound that may develop in the next few years as it appropriates the 80s whilst sounding unmistakably 2016.