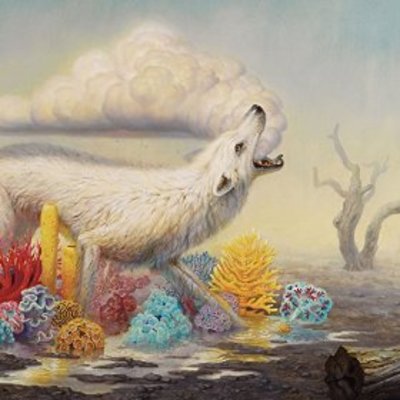 It’s not difficult to understand why Rival Sons have been able to place themselves in such a prominent position as future Classic Rock titans, when the quality of all their previous albums has been quite superb.
Mixing old school 70’s rock with a slightly contemporary feel, and then successfully turning the heads of David Letterman in the US for TV performance, and more recently Ozzy Osbourne, who promptly booked them as Black Sabbath’s opening act on their final live world tour. Hard work and relentless touring has been the bedrock of this talented four piece over the last few years and now all the planets are aligned to make this a spectacular year or two for the Californian band.

This new release ‘Hollow Bones’ will be their fifth album, and doesn’t relent in the quality of production with Dave Cobb back at the controls at Nashville’s LCS studios.

Opening with title track part 1 ‘Hollow Bones’ and an early indication that this is going to hold all the key elements that they have successfully deployed in the last 7 years. Thunderous drums, great rock riffs and a vocalist of Robert Plant proportions. This track reminds me a little of ‘Heartbreaker’ and I know it’s now a cliché to compare them to Led Zeppelin, but it’s so there for all to hear, particularly in the big hitting drums of Michael Miley. It’s a great start if a little short, but I guess that’s why it’s only part 1.

‘Tied Up’ is a contrast to that despite the heavy drum intro, and it has a much more soulful blues sound than anything else I’ve heard from the band before. Jay Buchanan preferring to take a laid back approach rather than the usual ear piercing screams he is renowned for. The whole track has a funky Black Keys vibe to it, and eases you gently to ‘Thundering Voices’ with a real bombastic drum and fuzzbox guitar opening, which blends into a psychedelic twist and turn of a melodic chorus.

‘Pretty Face’ is interesting as it has many elements of light and shade running through it, definitely not your average classic rock tune but equally it’s got a hook and catch to it that could make it a fans favourite. It takes more than a few listens for it to sit comfortably, which for me is a bonus, and similarly ‘Fade Out’ which has more of a nod to Queen than Zeppelin, Buchanan’s vocals going through the range in Mercury(ial) fashion. Stunning guitar solos from Scott Holiday here too and a darker element throughout.

Then on to the biggest surprise on the album, and the most enjoyable – reminding me of a much missed band from the 70’s – Steve Marriott’s Humble Pie, they recorded Ike and Tina’s ‘Black Coffee’ and here Rival Sons produce their updated version of the song. It’s perfect in delivery and still contains the awkward changing tempo and stripped back blues fuzziness, but it’s made for that Jay Buchanan wail. Four minutes in and the whole thing changes again and it’s all rock’n’soul…brothers and sisters, and an end of record jam reminiscent of a Doors classic. Love it, love it! Play it again.

The two longest tracks on this record are back to back and part two of title track ‘Hollow Bones’ steps in as the penultimate song. We are back to Rival Sons at their best, this could be their signature tune. A deep bass groove, soaring guitar work and drums that crash and burn in time with the ebb and flow of strong vocals. Gospel soulful sounding one minute, face melting rock the next, listen to this with the volume turned up, or on headphones to really appreciate Cobb’s sonic production work.

‘All that I Want’ is a ballad which demonstrates Jay Buchanan’s fragile side of his talent, heavy pitched vibrato sailing close to breaking point at the high end, but enjoyable nonetheless. It wouldn’t be Classic Rock without a ballad in there somewhere!

This is all great stuff, eminently listenable throughout and whilst it isn’t breaking the mould it does play to the strengths of this band. Few challenge the greats of Led Zeppelin, but in my view this band are the closest to come so far, and as this genre seems constantly under scrutiny with Gene Simmons recently quoted as saying ‘Rock is Dead’, someone should point him and other critics in Rival Sons direction, it’s very much alive and kicking.