A Broad Spectrum Of Rock On Green 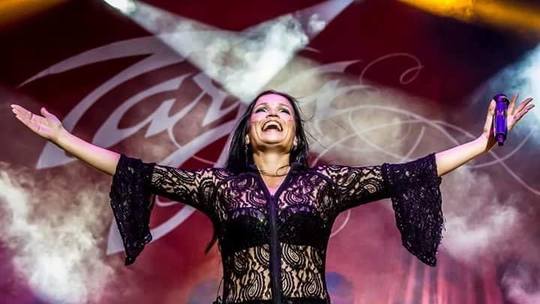 Had today been stereotypically 'British summer', the Kentish Town Forum might have filled up faster. As it happened, few fans seemed willing to step out of the uncharacteristically glorious afternoon sunshine into the gloom of a darkened venue. Many of them therefore missed out, because of the three opening bands, Immension fitted the bill best. Taking their guitar influences from old-school thrash (Megadeth when they play fast, Metallica when they play slow: they also covered 'Fuel', which was fun if not groundbreaking), their drum sound from the newer thrash of Machine Head and their vocal cues from BFMV, they provided plenty of warm-up exercise for the neck. As a fledgling band, they need to work a bit on stagecraft: their lead guitarist is too static and when their frontman had an interlude on the keyboard, he hammed it up too much. However, as they mature and gain experience, they should be ones to watch.

Republic of Rock 'n' Roll were the most incongruous choice to support a melodic metal co-headlining tour. They sound like the gazillion interchangeable bands that get touted as 'the new breed of classic rock': grungy, veering into bluesy territory when it's time to solo. The one difference was that the singer didn't try to sound American. He sang in English, but with a very pronounced accent from his native France. However, instead of getting sonic ideas from classic French bands, they seem to have incorporated Trust's politics. The best that can therefore be said of their set was that at least it kept them away from picketing oil refineries or spraying graffiti on the Place de la République.

Octanic sort of made sense just before Amaranthe because like them, Octanic have plenty of industrial-style keyboards and a mixture of harsh and clean vocals. Yet although they occasionally came up with a catchy riff, Octanic mostly relied on the keyboards for melody, which didn't work as all the other elements rather overwhelmed them. The vocalist was more intelligible than most growlers, but they just didn't have enough good tunes for this crowd. The frontman's repeated attempts to incite a circlepit all failed and at the end of the set, you could hear one of the drumsticks they threw into the crowd hit the floor.

Numbers inside the venue increased markedly as co-headliners Amaranthe prepared to take the stage. The band's intro tape pretending they were clones engineered by a dystopian tech firm was a clever way to launch into opener 'Digital World', although the guys in the front row looking up Elize Ryd's leather-look mini-dress would probably welcome such a future. The Amaranthe faithful were in fine voice as they sang along to a well-balanced set list.

Reaction to Amaranthe among the Tarja fans, however, was mixed. Some got into the blend of catchy numbers old ('Afterlife' and 'Electroheart' were especially well-received) and new (notably 'Massive Addictive' and encore closer 'Drop Dead Cynical'). Others could be heard to remark afterwards "Well... they were different". I suspect what rankles is that because Olof Mörck cannot play guitars and keyboards at once and understandably concentrates on his guitar solos live, the keyboard parts are pre-recorded. This doesn't matter as much when Mörck is melting everyone's faces, or when Morten Løwe Sørensen is sending shockwaves through the crowd with his kick drums, but at times when the main sonic elements are the two clean vocalists and a keyboard sound nobody is playing, it does look and sound a bit too Eurovision. Rock can take influences from all sorts of genres and still rock, but there's a fine line between being influenced by another genre and tipping over into it and at times Amaranthe were teetering on that line.

Tarja, on the other hand, left no one in any doubt as to her direction. From the moment the nitwit who had been tormenting our ears with dubstep and rap over the PA between bands was made to put some real music on instead while the headliner's crew prepared, it was clear things were getting serious. Opening with new song 'No Bitter End', already described in the press as one of her heaviest, Tarja went on to première three new tracks from her upcoming releases that continued in this vein, especially the relentless 'Calling from the Wild'. As a foil to this beefed-up sound, Tarja chose yet another surprising cover to feature in the upcoming next album and her live set, this time Shirley Bassey's 'Goldfinger'.

Another unexpected cover was Muse's 'Supremacy', which proved a splendid vehicle for Tarja to show off her range. It certainly shut up the fool who, when she announced that she was going to cover a band she loved, yelled "'Wishmaster'!" - as if anyone, regardless of the ins and outs of the story, would still have warm feelings for a band that had kicked them out. To drive this point home, when Tarja got to the favourites from her previous albums, she announced teasingly: "A song from the very beginning of my career... (long pause)... my solo career, that is" before launching into 'Die Alive'. In fact, the only nod to the Nightwish days was a song Nightwish had covered, Gary Moore's 'Over the Hills and Far Away', to bring proceedings to a close. It's rare for the second act on a bill to do an encore and the top act on the bill not to, but that's Tarja for you: she does things her way. And of all the many facets of rock on display at Rock on Green, Tarja's got the most enthusiastic response.