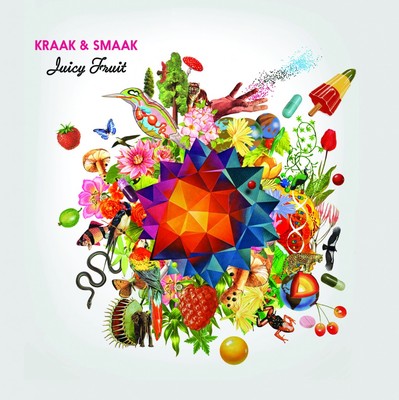 'Juicy Fruit' by Kraak and Smaak, from the Netherlands, starts off with ‘Prescription’ featuring American rapper and producer Eric Biddines. It starts off like a George Benson style 80's soul track but adds Biddines' rapping to good effect as the track heads more in to dance territory.

The smooth sound continues in to the second track, ‘So Clear’ featuring Meeka Kates but the album really clicks in to gear on its third track, ‘I Don’t Know Why’ featuring the superb Meyer Hawthorne. His smooth style fits in perfectly with the backing provided by Kraak and Smaak. As an aside, if you get the chance to see Meyer Hawthorne live he is brilliant!

The strings at the start of ‘Hands of Time’ featuring Alexandr London is the proof that Kraak and Smaak can handle different styles. The song brings to mind the feel of a smoky 60's jazz club with its pared back arrangement and gorgeous melody and is definitely the stand out track on the album for me.

I’d be hard pressed to find a track that really stood out for me in the second half of the album, but I couldn’t say that there were any tracks that I disliked. There is clear potential here in the tracks ‘So Clear’ and ‘Hands of Time’.

The main weakness with this album, it seems to me, is that the sound of the rest of the tracks is perhaps too similar. Whilst it is good to listen to in the background it doesn’t seem to progress musically notwithstanding some well-chosen collaborations. It is the type of record you might talk over at the end of a party, pausing to listen to it from time to time and think ‘This sounds good’ but you would probably struggle to remember it in the cold light of day.