<p>Field Day is a yearly outdoor music festival set up in The Drumsheds, London. The first festival took place on 11...

Fun In A Muddy Field… Day 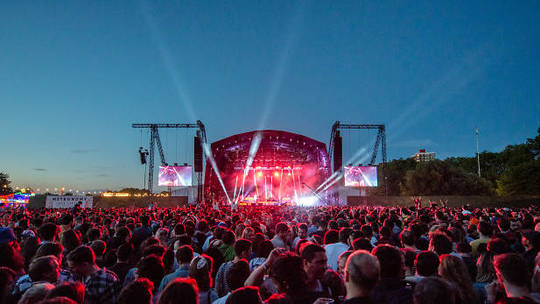 It’s been 10 years since Field Day first opened its doors at Victoria Park, and despite fierce competition with other festivals happening that weekend (Found, Parklife, Gottwood to name a few), Field Day proved why it still reigns supreme. For us music revelers we embraced the mud, took in the music and had a lot of fun along the way.

I have to say, the lack of sun and uninviting rain did sadly create a lack-lustre atmosphere for Motor City Drum Ensemble’s usual disco set, I do feel his slot was put on too early at 4pm (which was the case for DJ Koze also at 1pm). Perhaps the bookers were hoping for sunshine, but instead the Bugged Out tent received a newly built swimming pool in the centre of MDCE’s dancefloor.

The highlight of the Saturday had to go to Bicep. With a live set, it was a treat for the eyes and ears. Especially as their DJ sets have left me disappointed in the past. The sun had gone down and the synchronised lasers went on, with crowd pleasing tracks such as ‘Just’ and their remix of ‘Higher Level’ creating my first summer festival highlight of 2016, and no doubt memories for many many more in the crowd. It is refreshing to see acts such as Bicep, Four Tet and Daphni play in front of a crowd without hiding behind a DJ booth in utter darkness, and to see them all play in one weekend was pretty remarkable. Floating Points pulled out all the stops with a live ensemble, strings and all, which beautifully weaved his symphonic tracks into one long masterpiece.

Despite the headlining clash with Bicep, we managed to catch the last half an hour of James Blake. Just in time as he sang his new track ‘Retrograde’ to the attentive crowd. His voice mesmerised us all, but created a soothing atmosphere at the same time. A perfect ending to a hectic and muddy Saturday.

On the Sunday I was most looking forward to The Avalanches, making a comeback in the music game after a 16 year hiatus. It was a great moment to take in one of my all-time favourite tracks ‘Since I Left You’ and share it with a crowd who loved it as much as I did. In terms of new-music discovery on the Sunday, one track to look up is Mbongwana Star’s ‘Malukayi’, which added a touch of Congolese sunshine to a mostly rainy London weekend.

The last thing to mention is the crowd, one of the most laid-back, music-fun-loving crowds that will grace Victoria Park this year. Most of the people are there to take in the music, rather than parade around like a fashion show or be taking too many selfies (the fact that they beat the rain and mud is just testament of that). The crowd is what makes or breaks a festival, and it is great to see that it still attracts genuine music lovers. Here’s to another 10 years, and many more.