Left My Heart At The Isle Of Wight 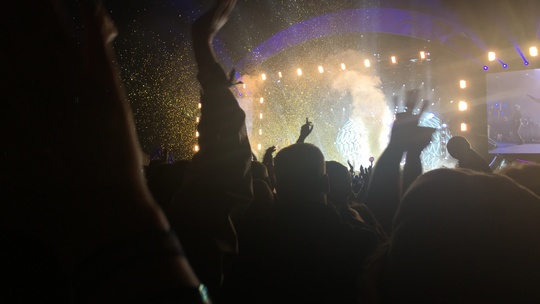 It’s not very often that you get home from a festival with genuine excitement to write a review, but Isle of Wight was an exception. From start to finish my experience can only be described as magical.

The attention to detail of the festival organizers was fantastic, from the surprisingly clean toilets, countless activities and phenomenal performances. The only complaint I have about the entire weekend is the seemingly never-ending walk from the campsite to main stage.

The festival had a diverse range of guests from those old enough to have seen Queen and The Who, ‘back in their day’ to an annoying group of 15 year olds who were aggressively shouting ‘Allan, Steve’ in the campsite at 3 am.

The highlights of the weekend for me were Gabrielle Aplin, Sigma, Queen, Busted and every moment I spent in The Hip Shaker Tent. Friday night was well spent seeing The Cure Heads singing my heart out to ‘Friday I’m in love’, undoubtedly one of the best tribute acts I’ve ever seen, and a massive crowd favourite. Sadly ‘Noasis’ had to cancel but were replaced by an early 2000’s late 90’s disco, which swarmed a crowd to Hipshaker on the Saturday evening.

Gabrielle Aplin’s set was phenomenal, it was my first time seeing the ‘Power of Love’ singer and after that performance it definitely won’t be my last. Her cover of The Weeknd’s ‘Can’t feel my face’ created one of the most electrifying atmospheres of the weekend.

Although Sigma was not an act I even had considered seeing before the weekend it was insane, I don’t think I’ve ever been in a better crowd. There’s not much more than I can say but that it was phenomenal, ‘Coming Home’ being a massive highlight for me of their set.

Queen, well what can I say. I never thought I’d be able to say in my lifetime that I’d of got to see them, thank you Isle of Wight for blessing me with that. I have to say I was skeptical at first after growing up with such a love towards Freddie Mercury but Adam Lambert showed such passion and dedication and certainly didn’t disappoint. ‘Crazy thing called love’ was my favourite of the goose bump worthy set.

Busted awoke my five year old self, it’s everything I wanted it to be, crazy how so many years later I can still sing along word for word.

Overall the weekend was incredible, leaving broke my heart. If you’re looking for a festival that’s guaranteed an incredible line up, experience and to help you meet some lovely people venture down to Isle of Wight next year.