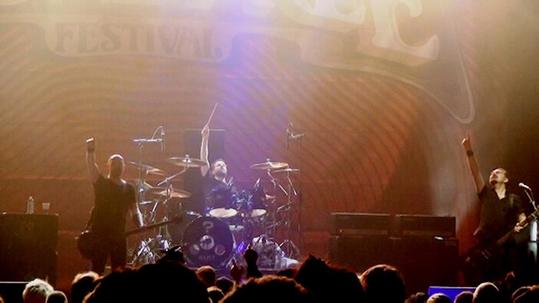 In a foretaste of the organisation or lack thereof that was to become a leitmotiv of the weekend, I was stuck in a queue outside the O2 as Stone Free Festival kicked off on Saturday. The man at the window was advising the people in front of me to go to another window. They said they'd been to the other window and been told to go see him. Maybe that's why the organisers put Jack Francis on the Fireball stage in the foyer: his country-rock sounded like it had been designed as hold music for people waiting in a queue.

Flicking through the programme on my way in, I saw that an inordinate amount of column inches had been given to Jackaman, then about to start on the Indigo2 stage in the early afternoon. What makes this even odder is that although she was in the rock band Saint Jude, Lynne Jackaman's solo output is not rock at all. Even in the interview in the programme, she admitted it was more soul, which belongs more in the sphere of what is known as classic pop. The overall sound of her solo band is more reminiscent of Joss Stone's work than anything rock.

What could explain this inclusion? If we discount the salacious rumours that went round the London rock bars when Saint Jude appeared out of nowhere, there are two possibilities. Maybe the organisers thought Saint Jude had a large enough fan-base into which to tap to swell numbers, although in the quiz on Sunday, the name of Jackaman's previous band was one of the questions and most contestants looked nonplussed. The other possibility is that now most of what passes for popular music doesn't involve any actual instruments, Team Rock, heavily involved with this festival, are trying to recategorise anything that does as rock. The problem with that is that it alienates a large number of rock fans. Uptempo soul music, which is what the majority of Jackaman's set was, is designed for dancing, but although there was plenty of space on the floor of the Indigo2, I didn't see anyone grooving along. Jackaman has a powerful voice, but if she wants to use it for soul music, she should play to soul audiences.

Back out to the Fireball Stage for The RPMs. Once again, we were on the outer fringes of rock, just in a different direction this time. When I was a teenager, this would have been classed as indie. In their lighter moments, they sounded like The Kooks; when they let rip, they sounded like a slightly less heavy version of The Wildhearts. However, they did get the crowd dancing, and although their gimmick of inviting a kid from the crowd up on stage was cheesy, it worked for the audience. Not my thing, but there seemed to be enough people whose thing it was.

No sooner were they done and it was time to return to the Indigo2, where The Virginmarys attacked their slot with a will. Danny Dolan in particular played like a man possessed, to the point where a roadie had to attempt the hazardous task of fixing his drum mics in mid-set. This being the first time seeing them, I was surprised by how much more raucous Ally Dickaty sounded live than on some of their studio versions, notably closer 'Just a Ride', but he built up a rapport with the audience by joking about parking foul-ups at the event and the band definitely gave us our money's worth.

As set times began to lengthen, it got increasingly harder to alternate between the two stages. I got back to the Fireball Stage partway through Vodun's set. From the psychedelic garb and tribal face paint, I'm guessing Vodun is an alternate spelling of voodoo. However, I have no idea if that was what they were singing about, because although the singer had a powerful voice and an extensive range, her delivery was unintelligible. The overall impression I got was that Vodun were somewhat disjointed. Here and there, were attention-grabbing riffs, clever drum fills or notes beyond most people's vocal cords - but when it came to constructing a song around them, the effort failed. Vodun need to tie their hooks onto a stronger line.

The first Il Cornuto signs of the day were raised in the air during Michael Monroe's set in the Indigo2. They were earned. Monroe blazed through a setlist that contained a heavy dose of recent material, of which protest song 'Dead Hearts on Denmark Street', a rallying cry against the homogenisation of London, went down especially well. He got up on the barrier for the anthem ''78' and climbed the speaker tower in 'Ballad of the Lower East Side', which got the crowd joining in. The band were on form too, especially Steve Conte, who soloed behind his back. By the time the set finished with 'Dead, Jail or Rock 'n' Roll', the singalongs needed no prompting.

The name Dorje sounded continental, so I made the effort to rush out to the Fireball stage to catch the tail end of their set, but their sound turned out to be yet another load of American-sounding drawl. This is indicative of a bigger problem. Because Saturday was Alice Cooper's headline day, there was no shortage of metalheads milling around the O2. Most of them did a lot of milling, because (as Apocalyptica rightly complained later from the main stage) there wasn't much else metal on the bill. In particular, there weren't any metal bands booked among the new bands showcased on the Fireball Stage. There seems to have been a concerted effort in recent years by radio stations to pretend that there aren't any new bands inspired by classic metal. On all the occasions I've quit listening to radio stations, there's been a definite moment when I've decided I've had enough, but it came after months where 'listening' to them had meant looking at their 'Now playing' indicator, refreshing again and again to make sure the boring new heavy rotation track they're playing has gone off, only to find the next one is more of the same. If there's one positive emotion the Fireball Stage inspired in me, it was how glad I am that I've quit listening to the radio.

After that rant, I really needed some Therapy? Good job they were closing the Indigo2's afternoon line-up. Given that the main doors to the O2 were about to open for the evening line-up, a surprisingly large crowd were in the Indigo2 instead of the queue. Last time I saw Therapy? was on the Jägermeister Music Tour with Skindred, when a friend who goes to lots of Therapy? gigs apologised to me for them not being nearly up to their usual standard. This time I could see what she meant. Instead of going off on one about politics like he did on that occasion, Andy Cairns was in more humorous mode, although some of the crowd seemed to have heard some of his jokes before, as with his introduction of 'Potato Junkie' as "An Irish folk song". It didn't stop them all chanting along that James Joyce was doing the same thing to their sisters, though (he must be a very busy incubus ...). Michael McKeegan was full of beans and kept pogoing: by 'Teethgrinder', the crowd had joined in. There were plenty of references to influences throughout, from the joke about a riff pilfered from Sabbath, to excerpts of 'Pretty Vacant' and 'Nowhere Man' before 'Nowhere', to the dedication of 'Die Laughing' to Phil Lynott, Kurt Cobain and Amy Winehouse, though I could hear no discernible trace of how she might have influenced Therapy?. And then finally, they played 'Screamager' and the place went mad. Sneaking away early to the main stage? Screw that, forget about that.