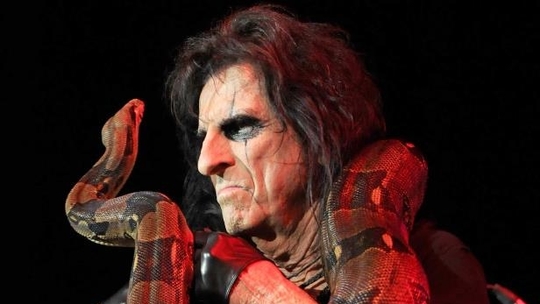 Blackberry Smoke, who opened up the main stage in the O2, have frequently been touted as the new Lynyrd Skynyrd, which rather begs the question of whether the post-crash Skynyrd is the new one. Certainly you know what you're getting with them: as you'd expect, it was unreconstructed old school Southern rock. This delighted a core of fans who had come along to see just that and sang along loudly to songs like 'Ain't Much Left of Me' and 'Let Me Help You (Find the Door)'. They also covered Led Zeppelin's 'Your Time is Gonna Come' in the middle of 'Sleeping Dogs'. This led to the only really extended guitar solos in the set. Most of the time, the guitar solos seemed to stop just as they got going, which is a shame. They clearly can let loose on the guitars, so one has to wonder: if they want to be the new Skynyrd, when are Blackberry Smoke going to write their own 'Freebird'?

The contrast with Apocalyptica could hardly have been more pronounced. The cello metallers played an archetypal festival setlist, mixing their own material with classical pieces played in a metal style and the classic thrash covers that first brought them to the public's attention. The Metallica covers were particularly prominent as the band announced a Metallica-heavy tour starting soon to celebrate 20 years since Apocalyptica's first album came out. On this showing, it promises to be a riotous affair. No idea why Perttu Kivilaakso thought it was a good idea to hold his cello upside down in the air while rolling round on the stage kicking his legs like a toddler having a tantrum during 'Seek and Destroy', but I'm impressed that he still managed to play it in that position. The crowd didn't do anything so OTT, but they did prove abundantly to anyone who still doubted it that it's possible to get a lot of people headbanging to cellos.

A long pause preceded the next act. For what seems like ages, everyone checked their phones, speculated about how long the soundcheck was going to take and laughed at the typo on the advertising screens that announced Black Sabbath dates at the O2 in the year 2107. Then, 20 minutes late ... "Oh, by the way, we're The Darkness" remarked Justin Hawkins, as if anyone else went round in a catsuit with a lurex codpiece without getting arrested.

Rumour had it that The Darkness were going to play the whole of 'Permission to Land', if not in order. This was eventually disproven. They played 6 tracks from their début, which included most of the big crowd-pleasers, although someone near me whose favourite was 'Friday Night' was disappointed they missed it out. Hawkins rather unsportingly blamed Apocalyptica for the fact that The Darkness couldn't play as long as originally intended, whereas someone who had been keeping an eye on the time noted that the whole main stage programme had been running late. He should have been relieved this disorganisation saved him from his own folly: in between a few of the songs Hawkins talked a lot of nonsense about shaving his head on stage, but The Darkness' set being cut meant his hair didn't have to be. The truncated set was a fun nostalgia trip, but I don't feel like I missed out from it not being longer.

The main reason I signed up to review Stone Free Festival, of course, was Alice Cooper, and he didn't disappoint. Naturally there were plenty of classic set pieces: 'Is it my Body?' with the snake, 'Billion Dollar Babies' with the fake notes, 'Feed my Frankenstein' with the huge walk-on monster, 'Cold Ethyl' with Alice manhandling the doll which then got replaced by Calico in an identical outfit for 'Only Women Bleed', 'The Ballad of Dwight Fry' with Alice in a straitjacket and 'I Love the Dead' after Alice's demise by guillotine. Some big setlist changes for this tour came in the songs about what a villain the character Alice is: of course 'No More Mr Nice Guy' was left in, but it was joined by 'Guilty' and, even rarer, 'Public Animal #9'. This was not a response to recent tragic news, but it's just as well, because it meant he'd dropped 'Wicked Young Man', which would have been very controversial if he'd played it.

The other big change was that after being guillotined, Alice was resurrected in the graveyard of the Hollywood Vampires. It was a shameless plug, but also allowed for four heartfelt and totally rocking tributes to dead legends of immortal music. Beginning with 'Pinball Wizard', the band continued with Jimi Hendrix's 'Fire' (in which Nita Strauss took the solo and gave a very good account of herself). 'Suffragette City' drew emotional cheers from the Bowie fans, but when the band launched into 'Ace of Spades', the crowd as one let out a roar and no neck could stay still. After 'I'm Eighteen' to let us all get our breath back, 'School's Out' finished the set in a hail of confetti and encore 'Elected' this year featured crew members dressed as Hilary and Donald in a comedy brawl on stage. Part of me wishes Alice would run again as he's got more sense than either, but then, maybe it's best he sticks to putting on stellar shows like this.