Wilco Johnson Doing What He Does Best At Stone Free 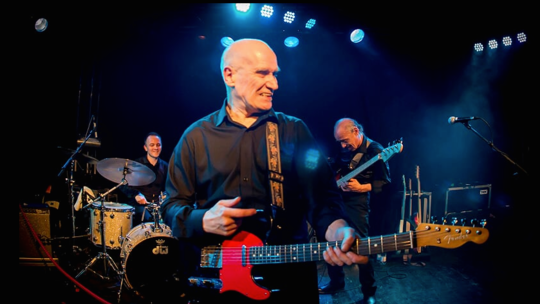 In contrast to Saturday's stage times, on Sunday, the Indigo2 and Fireball Stage were set up to clash or overlap most of the day. When it became clear that Broken Witt Rebel, on the latter, were just another drawling bluesy band, I headed post-haste to the former instead.

This was the day devoted principally to prog, the majority of fans of which are male, and an event under the Classic Rock banner might be expected to have an older fan base than one devoted to modern rock. Still, Cats in Space were the first band I've seen where the barrier at the start was populated entirely by middle-aged men. The band were all from the same demographic, with dress sense reminiscent of Francis Rossi, vocal harmonies akin to the cheesiest of 80s AOR bands (even if they cited the 70s as more of an influence, as shown by their cover of an obscure Slade song) and CVs full of bit-parts with much more famous musicians. Yet they wouldn't have got those roles without the requisite ability and when they started soloing, they really did rock. 'Mr Heartache' is the song they're promoting on their website, but the title track of their album 'Too Many Gods' is the one that got my attention live. Sometimes steadfastly refusing to be cool can be remarkably cool in its own right.

Some time to kill before Knifeworld, again in the Indigo2. You'd think it would have been an idea for the organisers to have had the record fair on the day when there were long periods with no one to watch, but no such luck. Pretty soon, Kavus Torabi was having problems of his own. First his guitar malfunctioned, so Knifeworld's wind section improvised to cover the roadie fixing it, but no sooner was it mended than the strap broke. Aside from these setbacks, the crowd for Knifeworld's brand of atmospheric prog rock was not large, but was very devoted, with many dancing along.

The next act in the Indigo2 should have been Messenger. They were replaced at the last minute by Teeth of the Sea, who delivered the biggest WTF moment of the day and not in a good way. It is well known that progressive rock sometimes likes to explore the boundaries of what can be considered prog, rock or even music, and this was certainly an example. The bassist spent more time playing trumpet than bass, there were very few drums on stage, the vocalist made peculiar noises instead of anything recognisable and most of their sound seemed to be pre-recorded electronic noise. The first applause they got was when a particularly awful squealing sound cut off abruptly, but alas, the racket started again soon after. I wasn't the only one who'd had enough and headed for the door.

Vambo, over on the Fireball Stage, must have been the only ones who were glad of the aforementioned change to the bill. They're yet another blues-rock band, this time with a strong Whitesnake influence and a hint of Foreigner on power ballad 'Running in Circles'. The singer could hit the high notes, the drummer had plenty of energy and the sound was very accessible, as underlined by their choice to cover Deep Purple's 'Burn'. With no competition from the Indigo2, they attracted quite a crowd.

More waiting around in the Indigo2, while some suspiciously sawn-off-looking guitars were sound-checked and whoever was controlling the PA clearly thought Rickrolling was still funny. Luckily, when Haken took the stage, they didn't act like guys with tiny instruments. It was impossible to keep track of all the time changes in any given song, and given all the Yes-like keyboards, the packed crowd understandably lapped it up.

After Haken there was enough time to catch a few tracks from Colour of Noise. Sunglasses - check. Hipster beards - check. Another in the long list of new bands trying to sound American? Check. Nevertheless, with Sunday being Fathers' Day, a lot of families who had been lunching at the O2's restaurants stopped to watch them.

A few of the lunching families noticed that the Indigo2 was also free entry, but not so many. That was their loss, because when it comes to dad rock, Indigo2 headliner Wilko Johnson is arguably the daddy of them all. The timings for the Indigo2 appeared to be slightly awry ("Not long ago, I had 10 months, now I have 20 minutes", Johnson joked halfway through his set), but he filled every minute with unpretentious trad blues, boogie and vintage rock 'n' roll. The more recent material in his set, notably the title track to 'Going Back Home', fitted in seamlessly, but the greatest audience reaction came with two Dr Feelgood numbers at the end of the set: 'Back in the Night', followed by 'She Does it Right'. Wilko Johnson may have been a bizarre choice for a day meant to be devoted to prog, but even without many casual O2 visitors, he still pulled a respectable crowd into the Indigo2.