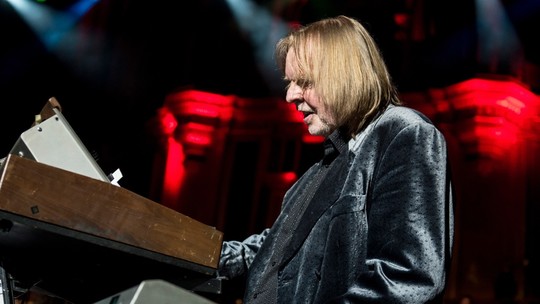 The stage time difficulties meant that the symphonic tribute to Pink Floyd had already started by the time the crowd from the Indigo2 had made their way to the O2. It was music for getting lost in thought, so I did. I wondered, in a genuinely curious sense more than a critical one, how whoever arranged 'Wish You Were Here' for orchestra decided that 'Welcome to the Machine' needed vocals, whereas 'Have a Cigar' should have its deeply biting lyrics removed? The title track did indeed work best without the orchestra, but was the irony of doing a Wish You Were Here Symphonic Live therefore lost on the participants? And as more legends are sadly lost, will more classic bands become classical music? Pink Floyd's music is certainly awe-inspiring enough to transfer to orchestra, but surely more attention needs to be paid to the fact that rock is meant to be rocked out to?

Steve Hackett and his band apparently had no time to soundcheck as it took so long to clear all the orchestra's equipment away, and his guitar tuner wasn't working, though I wouldn't have known if he hadn't said. After orchestras trying to sound like guitars, in parts of Hackett's set there were guitars sounding like violins. Hackett also comprehensively debunked the myth that festival setlists are not needed for prog audiences. Progressive rock is often associated with delight in the obscure, but the people in the floor seats only started standing up and screaming for joy when Hackett wheeled out some Genesis classics in the shape of 'Dance on a Volcano', 'The Lamb Lies Down on Broadway' and 'Firth of Fifth'.

What with Sunday being an all-seated gig and my being in an aisle seat, I spent a lot of time interacting with everyone else in the row as they arrived, went to grab drinks, came back etc.. Some of them were fuming, with horror stories of expensive meet and greets that went wrong due to pratfalls by organisers and/or venue staff. Marillion can't have been much happier, because once again the stage times for the main stage were not going according to plan, leading to cuts in their set. They made the best of it, with a setlist that varied between their 21st century output, like opener 'The Invisible Man' with its "invisible pulse" that went right through me all the way back in the furthest occupied block, classics predating Steve Hogarth's tenure like 'Kayleigh' and the hits from Hogarth-era Marillion like 'Easter', although Hogarth had a spot of bother with the higher notes at the end of it. Hogarth's histrionics were matched by Steve Rothery's glorious guitar work, but a personal highlight for me was 'Power', where the sound of Pete Trewavas' bass cut through both, as well as an inordinate amount of dry ice. After this performance, I am keen to hear what their next album brings.

And finally, after a very busy period for the stagehands, the caped compère appeared on stage to announce the headliner, playing the expanded version of 'The Myths and Legends of King Arthur and the Knights of the Round Table' in full "For the first time, and possibly for the last time." Once the interference on the sound system had been fixed, we were able to enjoy the wonders of an orchestra, 30-odd choristers, 2 lead vocalists and a 3-piece rock band to prove that what happens in Camelot doesn't always stay in Camelot. Plus Wakeman himself, of course, surrounded by keyboards on a platform at the back, resplendent in a cape that looked silver while he was up there, but green when he came down to take a bow at the end. Even the huge O2 stage looked crowded.

Naturally with so many participants, it was a challenge to focus on them all. 'Guinevere' boasted an especially wonderful guitar solo. The orchestra were majestic, especially on 'Sir Lancelot and the Black Knight', but from time to time, they could be seen beavering away, completely drowned out by Wakeman's Minimoog. (Some side screens so those of us at the back could see close-ups of the star of the show would have been helpful, but the festival management thought it better to have the festival logo projected at the sides of the stage instead.) The choir added a suitably medieval tone, most pronounced at the end of 'The Last Battle', a requiem for the lost age of chivalry that should have weighed on the consciences of those scuttling in the direction of the last Tube. My favourite of Wakeman's solos, though, was a long piano-effect solo in 'Merlin the Magician', which accurately captured the unpredictability of magic spells in the popular imagination. It was easy to imagine a cartoon sorcerer's apprentice running around to it.

The collection of established bands and artists at Stone Free Festival was impressive and well worth seeing. However, as well as getting some practice organising a p***-up in a brewery before next year, the organisers should reflect on one strange paradox about the line-up. The classic bands on the bill not only represented a broad spectrum of classic rock, but harked back to an even wider range of influences. Yet when you looked at the new bands on the bill, the overall message of the festival seemed to be: "We celebrate the past for its wonderful variety, but the future will all sound the same." Isn't the song 'Stone Free' about being different?