All Our Gods Have Abandoned Us

Read more
REVIEW album Architects All Our Gods Have Abandoned Us 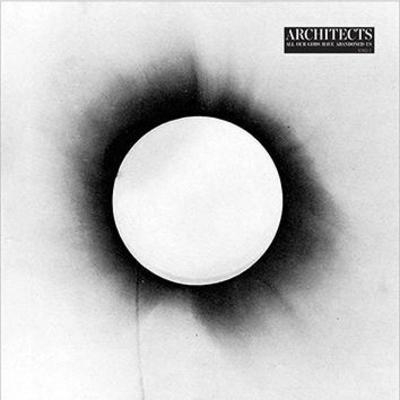 All Our Gods Have Abandoned Us

The Brighton quintet have been progressively burning the protest music brand mark into their blood since ‘Daybreaker’s release in 2012 but with dominant topics buried deep within “All Our Gods Have Abandoned Us” involving ‘dog eat dog’ treachery, environmental mistreatment on a global proportion and self-destruction, it is refreshingly evident that another dominant force of British metal music is continuing to sing/scream about something more relevant than your monotonous heartbreak situations and off-the-wall, beer-soaked revelry.

Important information to be included with a copy should contain a warning notice for the faint hearted and a word of caution about volume controls not being too high when expecting your typical 2016 ghost noted introduction. On the contrary, Sam Carter separates the feeble from the hard as a coffin nail with a burning and unexpected example of his now iconic scream straight out of the gates.

“Nihilist” essentially beats detrimental realisation into thick-skulled heads that a current overview of contemporary living would quickly reveal as “Downfall” sits back sipping on an ice-cold lemonade, ready to observe the deadly vipers head slowly being separated from its body with objective words of distaste towards a ravenous appetite.

Guitarists Tom Searle and Adam Christianson make their return with nothing slap dab different in terms of beefy riff tweaking from previous work but persistently deliver a rhythm system alongside Dan Searle’s sharp skin work and Alex Dean’s bass beats that keeps heads incessantly moving back and forward in whatever degree of speed they inspire.

The vocal severity of “Gone With The Wind” proved popular as Mr Carter pushes himself to the limits, unconsciously telling the listener to stroke their own throat in concern.

“A Match Made In Heaven” was released just about three to four months prior to the album’s release which was a smart decision in terms of marketing and sourcing exactly what their fans have found most attractive, following the bands lyrical investigation into topics such as anti-warfare accusations and possession overtaking morality.

The LP closes on eight minutes of “Momento Mori”, a cold reminder of death’s inevitability washes over the prolonged track. The trick however, flows from the necessity to become constantly mindful of death, pushing the need for accomplishment and achievement over those who choose what they live and fight for in a wild grip for unmitigated individuality against those who seek to choose for them.

‘All Our Gods Have Abandoned Us’ is easily recognised as one of Architects strongest albums to sit beside ‘Hollow Crown’ and ‘Lost Forever // Lost Together’, steering them down a political path to help awaken a fan thread that do not realise that their voices can help shape and hopefully repair a and lend support to a society that is progressively caving in on itself.