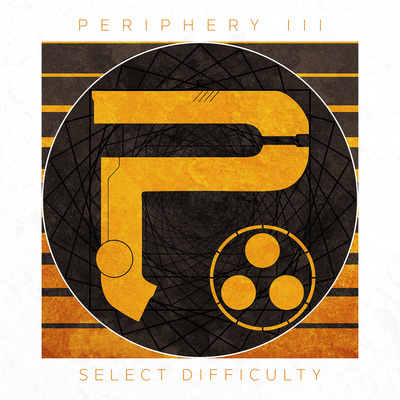 It's perhaps surprising that no tech-metal band has picked the title 'Select Difficulty' before. That, after all, is what the subgenre does: it is characterised by a quest to make complex and demanding music. The corollary of this, at least in Periphery's case at present, seems to be fury at those who choose the opposite path, as opener 'The Price is Wrong' is full of thumping, snarling rage at society's apparent descent towards "Idiocracy"- style dystopia.

The assault continues with 'Motormouth', which is more obviously politically slanted. It's not hard to guess which political motormouth Periphery have in mind and therefore conclude that Periphery see a certain candidate's success in the primaries as the surest sign of the stupidity decried in 'The Price is Wrong'.

From there on in, we enter territory more closely associated with Periphery, where the harshness is still present (notably on 'Habitual Line Stepper' and 'Prayer Position'), but it becomes increasingly interspersed with melodic interludes. 'The Way the News Goes ...' is distinguished more by its interesting vocal melodies than any comment about what's making the news. Violins make their first appearance in the poignant contemplation of mortality that is 'Marigold', then they flit in and out of songs all the way to the close of the album.

It is also well worth noting that Periphery's idea of selecting difficulty and the road less traveled does not preclude drawing people in from other paths with a catchy tune. 'Flatline' has some very memorable moments, even if it is evident that this song has a social message, but not exactly what. (Looking at the lyrics, my best guess is that it refers to authorities treating certain areas and groups of people as trouble, which then becomes a self-fulfilling prophecy.) 'Catch Fire' has a splendid singalong chorus about shared enthusiasm, which could be for a cause or equally for the live experience where I imagine it will get regular airings.

The clearest candidate to become a mainstay of Periphery's live shows, though, is closing track 'Lune'. It starts with a riff designed to elicit a cheer of recognition. The hypnotic drums and emotional vocals are ultra-modern, but there is a hint of classic prog in the way the song builds up slowly to a climax. Then there are the none-too-subtle opportunities for audience participation. If you plan on seeing Periphery any time soon, prepare to yell at the top of your lungs that yes, you feel the love. And just in case you were in any doubt that they intend to take this one to the stage, there are some gang vocals towards the end as well.

If you're an established Periphery fan, 'Periphery III: Select Difficulty' should feel like a natural progression from where the two 'Juggernaut' albums left off. If you're new to Periphery, then it provides a good introduction. There are moments to grab anybody's attention, and others where it's hard to get one's head round everything that's going on. However, if you select the highest difficulty level on a game, you expect to take a while to get to grips with it. As in a game, with this album, that's part of the fun.