Blissfields is an annual music festival in Hampshire, England founded by Paul and Mel Bliss in 2001 at Bradley Farm,... 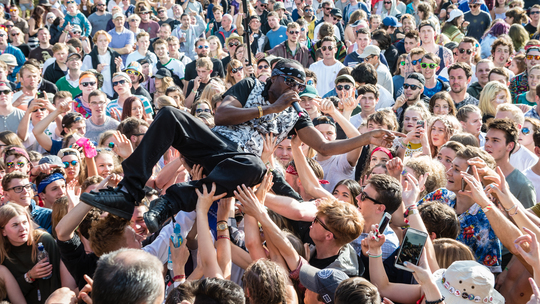 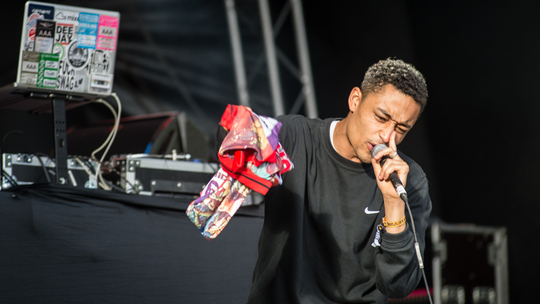 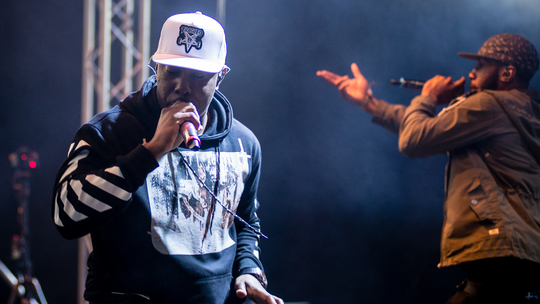 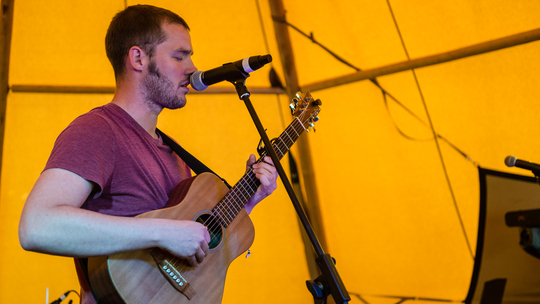 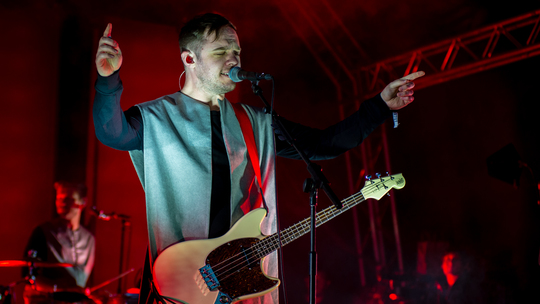 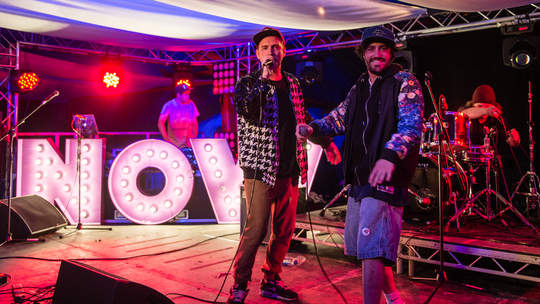 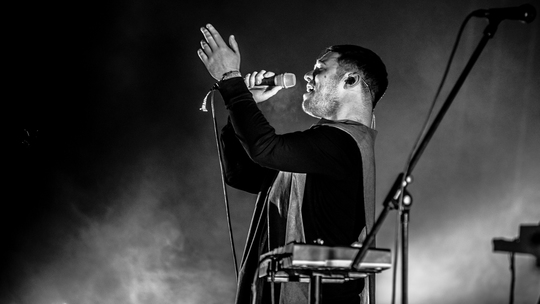 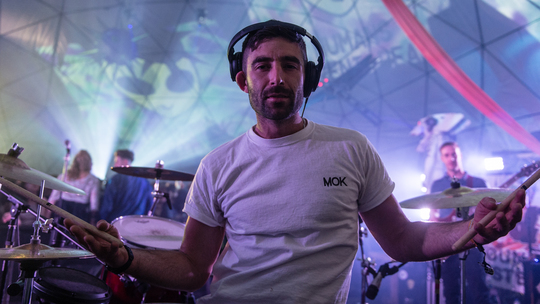 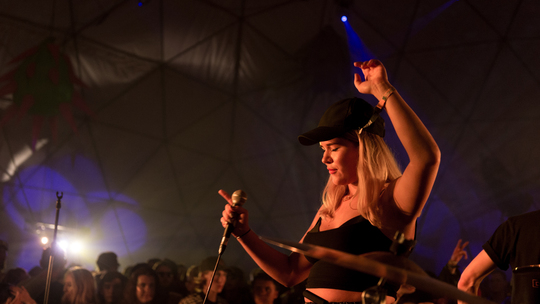 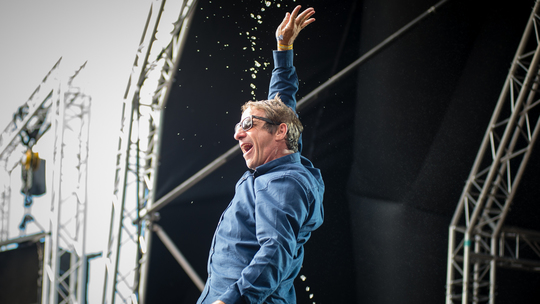 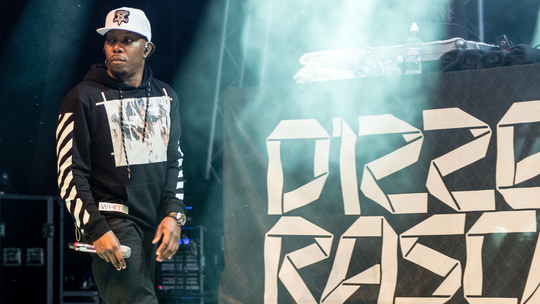 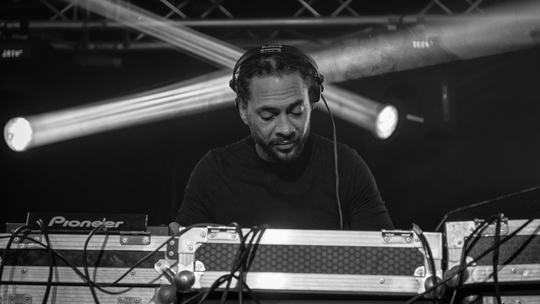 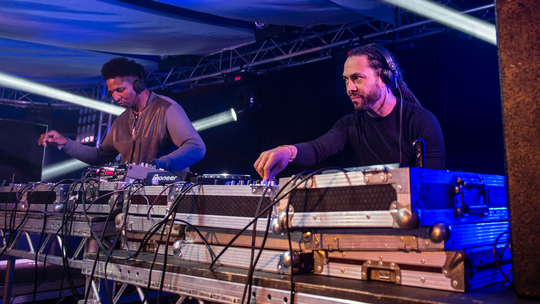 Blissfields is apparently the only UK festival that doesn't 'do' mud and everyone that I spoke to prior to arrival at the beautiful fields of the Bliss family confirmed that it barely, rarely or never rains here. Unfortunately this English monsoon summer of ours had other ideas, and it was already pretty squelchy by 10pm on the Thursday night. Although, to be fair, even the mud was blissful, the lovely firm face-pack kind of stuff that you can squidge and shimmy through barefoot, not the sodden brown torrents that you see at Glastonbury.

Now into its 16th year, Blissfields was the brainchild of Mr and Mrs Bliss, and started as a small party within and around their family home. It's been at the current farm location for 6 years now and has expanded to a 5.5k capacity weekend, but because of the well-executed layout and the variety of stages, spaces and areas, it never feels overly crowded.

Thursday night kicked off with a bang as soon as the skills of 'Too Many Ts' hit the stage. So much energy and a great hint of what was to be in store for the rest of the weekend. Their style is a laid-back hip hop pairing, with incredible levels of bounce. 'Molotov Jukebox' took the first night headline spot and kept the party going with their blend of Amy Winehouse-esque relaxed accordion playing vocalist and off-kilter beats.

The weekend's theme was 'House Party' and it must have taken months of very hard work to get all of this set up and in place. In the midst of one field there was a cross-section cutaway of a house, complete with quirky furniture and decorations. A terrific focal point for lost individuals to chill and meet new friends. Another corner had a sandy beach with boat, decking, and a beach bar. And in the 'Hidden Hedge' area, only an actual cockpit of a Boeing jet plane with lights and decks and DJs replacing cabin crew and controls. Wow.

Friday and Saturday saw a mixture of convincingly wet showers with a spattering of almost-but-not-quite sunny spells, followed by some thunderous dub and bass. The famed Blissfields clear skies and sunshine were taking their time to arrive. Thankfully, the few heavy showers didn't deter any of the party-goers from getting into the atmosphere and the mixture of people I met were some of the friendliest bunch ever. Kindness and loveliness was in abundance - a stag party group who had somehow lost their stag roped in the whole dance tent to search for him. There were some of the cutest (and youngest!) festival babies, a plethora of delightful stall holders, and even a marriage proposal!

Musically there were so many treats, and the organisers had clearly put a lot of thought into their bookings, ensuring that while there was a range of sounds, the whole weekend had a smooth flow to it. While Thursday was about getting a feel for the place and the overall festival vibe, Friday was more about the party sounds and Saturday all about the big names in rap and hip hop.

Friday afternoon for me was all about the Sofar Sounds Brighton team takeover of The Larch tent, and proved yet again that I still get that magical tingle when I see and hear bands that I didn't know beforehand. 'Fond of Rudy' opened up proceedings with a blend of indie pop 80s-tinged liteness , precisely what was needed to ease gently back into the day. A little while later, Reuben Hollebon gave me those shivers again, with a mini size guitar that had that sweet scratchy kind of sound and a voice that was almost instrumental. Just beautiful.

The rest of Friday pretty much whizzed by in a whir with 'Honne', 'Swim Deep', and 'Everything Everything' providing the early evening party tunes, and proving highly popular with the teen attendees. Norman Jay rocked out a classy set around midnight, but for me the highlight of day two was the late night (more like very early morning) headliners of The Hidden Hedge stage - 'Mok'. This Brighton based band, with their high energy new wave rap, totally owned the stage and stirred up the crowd. Chants of 'Turn it up, turn it up' before they came on were soon replaced with the smiliest, bounciest audience I've seen in a long while. The pairing of Lee Jones with his electrifying enunciation and the fierce power notes of Gracey Croucher was mesmerising and an impressive end to the second blissfilled day.

Saturday started with a refreshingly sharp shower which blew away all the cobwebs and cleared the air before 'Beans on Toast' took to the main stage, bringing the sunshine out with him and turning the air a slightly mellow shade of blue. His folky telling of topical tales went down well and towards the end of the set it was clear to see a lot of free flowing admiration.

The afternoon held a worrying number of clashes of awesome bands in different places, meaning that I had to exhibit a little bit of festival stubbornness, dig my (welly boot) heels in, and just wait for the music to come to me at The Manor (main stage). And come to me it most certainly did. From around 4.30 there was a string of absolute festival winners, starting with 'Rationale', who proved to be as endearing and charming off stage as well as on, leading on to 'Dub Pistols', who despite Seanie Tee's dose of man flu, prevailed in their rebellious and rowdy show, which saw some epic scaffolding climbs and genius stage dives and crowd surfing. 'Loyle Carner' was a name that I'd been looking forward to seeing, and I wasn't disappointed with his easy going, self-deprecating and humble style of hip hop. 'Shy FX' then warmed things up considerably with his jungle massive set, in preparation for the biggest headliner you could imagine... and also the biggest festival surprise of the weekend for me.

‘Dizzee Rascal’ was probably the one artist on the bill that I was least looking forward to, having really only been aware of that "Bonkers" tune of his. But despite my denial of knowledge of any of Dizzee’s music, I found that 90% of the set was familiar and unexpectedly I was able to sing, dance and bounce my legs off along with pretty much the whole field. We jumped, went down low, and bounced back up from start to an amazingly pyrotechnicly stunning end, and there wasn’t a single person there who left without a grin stretching from ear to ear.

It was then over to The Den then for 'Subgiant' and 'Roni Size and MC Dynamite' with even more dirty filthy bass lines. I had the ultimate privilege of watching Roni Size from the elevated sound deck along with the Bliss family, and it struck me completely at that point that this festival wasn’t about sponsorship, or corporations, or pleasing the musical powers that be. This festival is about love, and music, and love of music, and hopefully this will always be the Blissfields spirit.

Finally with legs that could barely still stand, it was over to finish the house party in The Hidden Hedge with 'Serial Killaz' knocking out a heavy drum and bass set and 'Mary Miss Fairy + Mini da Minx' closing it down. By 3.30am, but with still more of the final set to come, my legs could take no more, and I admitted defeat and crawled back to the tent to dream about the state of pure bliss that this festival had induced. See you back in the fields of Bliss next year…