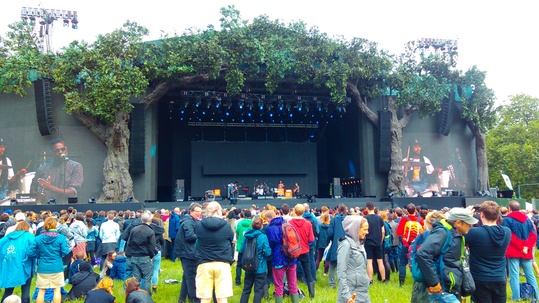 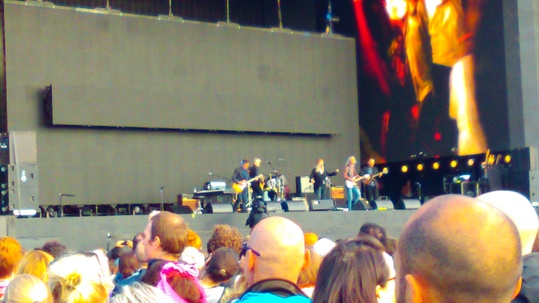 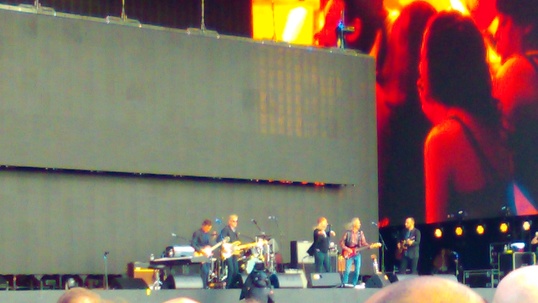 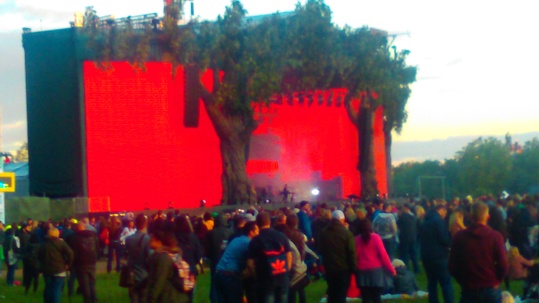 Set to a backdrop of unprecedented social and political turmoil, Massive Attack’s visit to Hyde Park couldn't feel more timely. This is the first day of 2016’s British Summer Time strand, and – as the leaden clouds reflect – there is a shadow looming over us all.

Before the trip-hop pioneers take to the stage, however, we’ve got a stellar supporting cast to get through. TV On The Radio are among the biggest names, though their set is something of a mixed bag. Songs like ‘Golden Age’ and ‘Winter’ sound soulful, infectious and distinctive on record, but the rising wind and a seemingly indifferent afternoon crowd steal much of their thunder today. ‘Wolf Like Me’ rallies the front rows, but ‘Happy Idiot’ is obscured in a blur of noise. For all their charisma and clout – and a back catalogue most bands would sell their nans for – this just isn’t their day.

After a confounding, brilliantly uproarious performance from Ghostpoet, it’s Patti Smith’s turn to grace the mainstage. Still a firebrand after all these years, she comforts and confronts the crowd in turn – ripping through ‘Free Money’, and an incredibly moving cover of Prince’s ‘When Doves Cry’. ‘Because The Night’ predictably wins the biggest reaction – and Patti nails it– but it’s an adapted rendition of ‘Land’ that hits hardest.

Backed by images of the Occupy movement (we’re sure that the frisson of sticking it to the 1%, at a festival plastered with Barclaycard branding, is not lost on her) it’s a resounding cry of freedom, and a tribute to the liberating power of rock ‘n’ roll. Nostalgia certainly plays its part, but by splicing in musings on contemporary struggles, Patti and her band make it feel entirely on point. For ten minutes or so the challenges and horrors facing us all feel that bit less insurmountable… And then it’s all over.

As Warpaint arrive on the second stage, the heavens open. Their hazy, otherworldly fare is an acquired taste, but it certainly chimes with the general vibe today. However, it’s soon time for Massive Attack to take over. They set out their stall early on, performing ‘Eurochild’ for the first time in almost two decades. It’s a powerful statement, as they urge the country not to ‘Let the racists and bigots back into this situation.’

If ‘Brexit’ – an idea as ill-conceived as the term that’s come to represent it – is the elephant in the room, 3D and Daddy G confront it head on. Backed by LED panels that read ‘We Are In This Together’, and parodying the absurd playground rhetoric of the referendum campaign, they imbue songs like ‘Pray For Rain’ (featuring TV On The Radio frontman Tunde Adebimpe) with a seething intensity that’s sometimes MIA. The visual effects are impressive, and so is the array of guest vocalists, from a wheelchair-bound Horace Andy on ‘Angel’ to that much-trumpeted revival with Tricky. Young Fathers add some fire in a fitting meeting of the minds, taking potshots at the Johnson and Gove show along the way, before a double-header of ‘Safe From Harm’ and ‘Unfinished Symphony’ brings the curtain down. It’s an emotional experience, as much for the newcomers as those who saw it all the first time around.

Most of all, it feels like a truly momentous performance: sometimes shot through with apocalyptic angst, sometimes furious, and in the case of the closing numbers, downright beautiful too. In other words, just what’s needed right now.