Connan Melts The Southbank Down 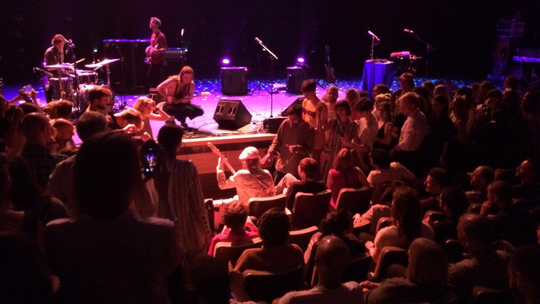 Connan Mockinson was the latest act to grace the Southbank Centre stage during the Guy Garvey curated series of shows – Guy Garvey’s Meltdown.

Mockinson picked a scorching Wednesday night to play his first London show in a very long time. 2,000 hipsters made their way over from Hackney and Peckham (probably) to welcome him, taking over a part of town usually dominated by tourists and second-rate street performers. In truth the Southbank Centre provided an impeccable setting with wonderful sound for a fun jamboree of a concert, which was the best gig I have attended in 2016.

Mockinson arrived on stage with his band donning silver silk pajamas, pink beret and matching cowboy boots, casually sipping on a bottle of red and although many are no doubt skeptical of his dress sense and cat like demeanor (think camp Keith Lemon), Mockinson’s musical ability cannot be disputed.

The first of a string of hypnotic jams was delivered from within the front row of the crowd before Mockinson ushered the seated audience to come down to the front of that stage and cram the aisles – which is where the majority stayed for the rest of the show.

After collaborating with Mockinson on his latest album 'The Colour in Anything', James Blake snuck on to the stage to play synth and look awkward amongst two of Mockinson’s male percussionist’s, both of whom stripped off to reveal they were wearing ladies knickers early on and performed the rest of the show wearing nothing but.

This was in fact a celebration for Mockinson in a prestigious venue. Musical highlights came from Dolphin Love and I’m the Man, That Will Find You. A new album is well overdue but we are still waiting to hear if one will be forthcoming.

Fingers crossed he doesn’t leave us waiting too long.