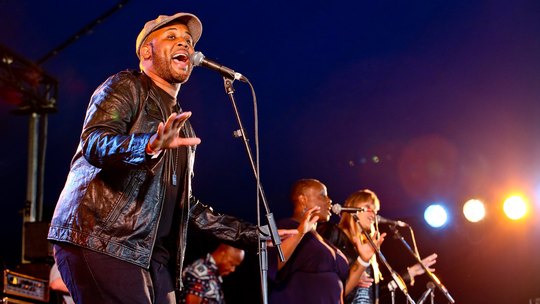 Tony Momrelle opened up as support act to the legendary funk and disco band; Earth Wind and Fire at Bournemouth International Centre. Tony began his set with the uplifting and soulful song Spotlight, an infectious song that had people moving and grooving in their seats. Throughout his set Tony had an engaged audience with some being familiar with his current and historic collaborations with Incognito and Sade, amongst other artists.

It's not difficult to see or hear this man’s professionalism and enthusiasm, his performance of songs such as ‘All I Need’ and ‘A Million Ways’ and especially ‘Pick Me Up’ are reminiscent of older timeless soul and R&B, that any soul lover will instantly be drawn too. His slower tempo, performance of ‘Remember’ had the audience gently swaying and listening intently. Tony referenced the poignancy of and beautifully covered Marvin Gayes; ‘What’s Going On’, this lead into his newest single ‘All I need’.

Tony encouraged audience participation and keenly warmed the audience up for the main act, in a venue that can be limiting to the soul grooves of his music, as the audience, were seated.

Tony Momrelle sound is an ageless fusion of soul and gospel vocals, that are to be appreciated. He gives his all during his performance to his audience and fans, whilst this is also evident in his C.D signing, during the interval whereby he had the opportunity to truly engage with all his fans. He is an artist to be added to any play list although he is even more enjoyable in his live performance.