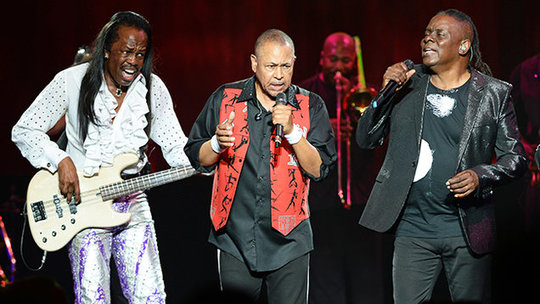 Bournemouth International Centre on the 2nd July 2016 hosted Earth Wind and Fire with support act Tony Monrelle; I doubt there is a person on the planet who is not familiar with the timeless, disco, funk mixed genre fusion band from the 70’s or their songs and whom continue to have an on going worldwide following.

The band is continues to be made up of the original 3 members Philip Bailey, Verdine White and Ralph Johnson AKA Slick, since Maurice Whites passing in 2015. This did not stop their fans from filling the venue. The love and devotion of fans created a warm and welcoming atmosphere prior to the concert start, with many fans arriving early.

Having grown up on EWF this was a performance that had me excited and feeling fortunate to see. The BIC as a concert venue is seated, which I had not expected, and initially felt restrictive as I really anticipated getting down with EWF as they performed. Having said this, it wasn’t that bad and I surprisingly managed to squeeze in a couple of step and slide moves, it was overall, EWF’s stage presence, performance and sound quality that overcome the limitations of the venue for me.

Of course the show began with ‘Boogie Wonderland’ an instant classic and a big hit with the audience, who subsequently rose from their seats to rock to this classic and show their enthusiasm, appreciation and love. This subsequently led into a bass solo and introduction of 'Shining Star', which continued to raise the remaining crowd.

Their performance of 'Serpentines Fire' included a large screen of a tribute video of late Maurice White and their past highlights, that appeared to sing alongside their performance. Without giving away the set list which is tempting, you can rest assure that their concert and songs provided classic hit after hit and for the die hard fans they included less popular songs, while maintaining a feel good atmosphere.

The crowd did not fail to move and groove with lots of hands clapping and waving of hands in the air, the instrumental sections at times paused the crowd this would be short lived as soon as songs such as ‘Brazilian Rhythm’ and ‘September’ were performed.

This concert was everything you could expect from a EWF concert, glorious and timeless tracks, energetic formation dances, musical arrangements, percussion and instrumental solos and vocals that you cant help to sing along too. This was throw back night into the talented musical geniuses and fearless experimental tracks and falsetto vocals of Philip Bailey and the whole EWF band that evokes for many nostalgic memories and has proved the longevity of their sound and music.