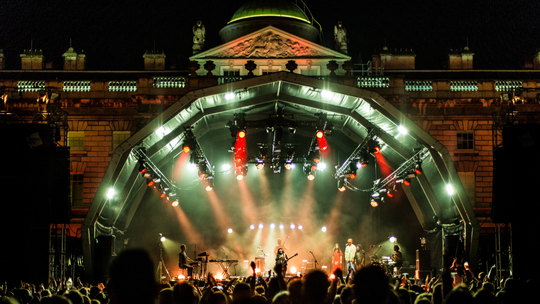 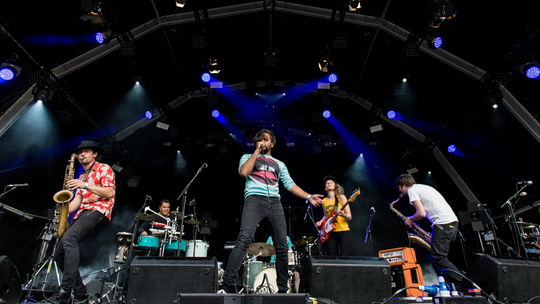 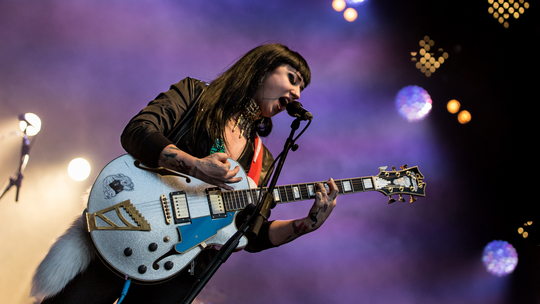 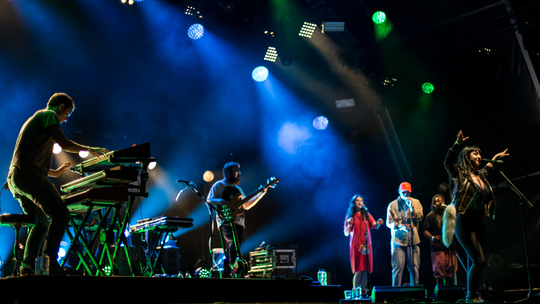 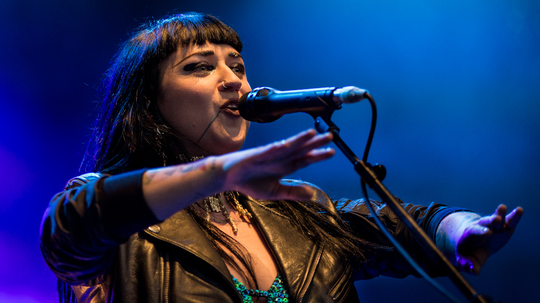 Hiatus Kaiyote are difficult to constrain to a genre or several combined. Their sound certainly has strong elements of a neo-soul, hip-hop, future-funk, jazz fusion, but the ‘feeling’ they give is that there really are no boundaries. They use a lot of strong elements in their tracks, played emotionally with melodic storytelling features. This, with a style of blending through these 'groups of genres’ in a single song or switching them on a beat. You do see other bands trying similar things, but for Hiatus Kaiyote it works and it works so well. The group consists of vocalist/guitarist Nai Palm, who writes mesmerising lyrics which fit into this true musical melting pot created with Paul Bender - Bass, Perrin Moss -Drums and Simon Mavin - Keyboards.

Tonight's concert is at Somerset House, “an object of national splendour” completed in 1801 and located on the river Thames in central London. As part of their Summer Series with American Express, those experiencing VIP treatment on the terrace overlooking the river were certainly treated by DJ Bobafatt. Whose selection of tunes more than complimented an English summer’s evening with a soulful hip hop vibe. It's a great venue for live music utilising the large courtyard space, which is surrounded by the main building and the staff were cool.

The support act Melt Yourself Down made a big intro to the show with a lively performance, headed by lead singer Kushal Gaya, who used every part of the stage to express their music and joining the crowd mid-song. This was my first time seeing the band after I’d missed them at a festival a couple of years back and MYD know how to bring it! Engaging the crowd with a positively commanding interaction, Kushal barely stopped moving. ‘Dot To Dot’ from their latest album ‘Last Evenings On Earth’ stood out for me. A bohemian trance feeling track, with playful funky saxophones.

Hiatus Kaiyote stepped onto the stage greeted by a worthy applause as they plunged in. The mood invoking synth sounds began with a mellow surge into a subtly indulgent version of ‘Choose Your weapon”, leading straight onto “Shaolin Monk Motherfunk”, just as it does on the album, but better. There felt like an immediate acceptance from the crowd that their expectations were being met, and an atmosphere of anticipation of what was to come. Hearing the folk sounding intro to ‘Breathing Underwater’ was an obvious highlight for the audience, as they reacted with sounds of joyous screams.

By the time they got to the spiritually cosmic ‘Atari’, the evening had been established and Hiatus Kaiyote had displayed fine-tuned musical arrangements, alongside Nai Palms beautiful vocals. This song encompasses a lot of their sounds diversity, style, damn skill and innovation, which gives you a good insight into them as musicians.

They played some new material, which felt like an extension of their current album ‘Choose Your Weapon’, and Bender shredded the bass on one song inspired by Nai Palms “imaginary grandpa” Sir David Attenborough, which she mentioned with a cheeky sincerity. The song ‘Borderline With My Atoms’ was infectious and the fans sang along to ’Nakamarra’ from their 2012 album ’Tawk Tomahawk’, as they did for most of the show.

Closing the night to an encore, Nai Palm shared, “this is for the pirates they used to hang here, apparently". HK played the somewhat cinematic and very funky ‘By Fire’, with Palm fully expressing herself through guitar accents & head bops.

Hiatus Kaiyote are not a trend, more of a 'not so hidden gem' all the way from Australia. They seem fairly modest with a lot of experience touring and have a growing global fan base, including well established musicians. I overheard a few fans in the audience, some were artists themselves, complimenting the band's style, musical arrangements and changes in patterns, with awe.

They are inspirational and again, it’s good to see a band you value play so well.