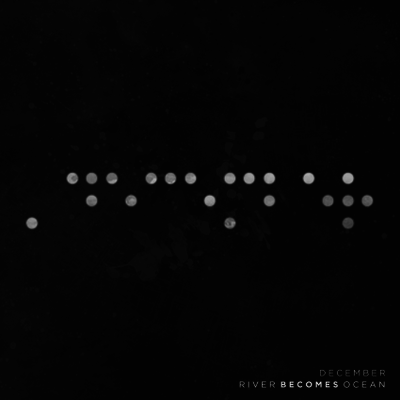 Only forming in late 2013, River Becomes Ocean have been clipping heels with pretty big names including guest vocals from Silverstein’s Shane Told on their previous EP and Asking Alexandria’s Sam and Joe Graves in correlation with ‘December’s production process, explaining the surprisingly sharp sound unexpectedly found on their second EP.

These four Brighton boys are still content however on bringing about a wealth of attention to themselves yet again and with what they have to offer, it does not take much encouragement to take twenty minutes out of the day in order to discover their refreshing and alternative take on hardcore rock.

Their second release finds them more or less reinventing their original attempts of rock originality and with the group one member down in this chapter, they decide to hang their pop rock endeavour back up in the closet to be replaced by something slightly more spiritual and emotionally haunting.

“We Will” opens with a low tone chant before bursting into a throaty growl and a selection of high-fret guitar plucks before moving into the quartet’s familiar habit of hook choruses.
Front man Marvin McMahon has had the good fortune to mix pleasure with business, being a successful composer himself in his professional life for a number of established companies.

It is no surprise however, that his thick interest in the dramatic and cinematic sound would seep deep into the cracks of his other projects, with black and white examples smeared all over the edges and centre of “Seven”.

An abrupt “blap” of Dorian Neidhardt’s snare drum and the atmosphere is altered with a ghostly guitar note ringing out across the speakers from Danny Snow’s guitar. The lack of bass guitar is noticeable in regards to the opening missing that extra punch but the residual three minutes establish a strong song writing etiquette with a powerful outro.

“Lies” is likely the weakest link out of the five as the chorus continues to do the majority of the work in comparison to the verses which are left slightly lacking in interest but does not affect the overall presence of the remainder.

‘December’ is almost like listening to a different band when measured up to ‘The World Around Me’ but with the genre currently developing and broadening its wings into similar fields, it is not only a timely decision made but also unpredictably interesting to listen to with nowhere but up for the four-piece to gradually ascend to.