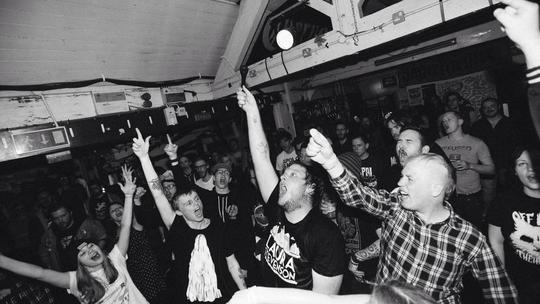 Sunday 10th July is a pleasant day in the south: blue skies, bright sunshine, barbecue weather of sorts. There’s a light, pleasant breeze down the streets of Kingston as you walk the short distance from the station to the self-described ‘most notorious rock ‘n’ roll venue in south west London’.

No such breeze reaches the back room of the Fighting Cocks, an almost entirely un-ventilated low-and-vaulted ceiling venue attached to a pub. The afternoon’s gig is sold out, and despite the earlier-than-early doors (Banquet have set the curfew at 7pm to avoid any tough decisions regarding the Euros final) the place is packed out. This means that by the time Australian punks The Smith Street Band come on stage, a bit after 6pm, the audience is suffering more than a little in a rather stifling heat.

The band themselves make little note of any such discomfort-in fact, lead singer Will Wagner almost certainly has rather more uncomfortable things to worry about, like the muscle tear in his leg, sustained at a show less than a month ago ago. It’s enough to have put another musician off the prospect of a tour of the opposite side of the world-but with the help of a simple stool (the WIL-CHAIR being the punk, stripped-down version of Grohl’s custom made throne), Wagner demonstrates from the very start that he’s more than capable of overcoming this particular adversity.

Kicking off with Throw Me In The River’s ‘I Don’t Wanna Die Anymore’, the band show no signs of fatigue from an already intensive few days (the night before saw a show at Camden’s Underworld, and before that was a trip to the Cotswolds for 2000 Trees), and the high energy set kicks off with a bang. The band are tight,

It’s a shame the crowd aren’t more expressive in their appreciation for the band - the Fighting Cocks is an ideal venue for getting thoroughly involved in cheerful, jumpy, sing-alongs such as those The Smith Street Band are so adept at writing. Put it down to the heat or simple Sunday afternoon fatigue, there was definitely more cause for celebration at this show but the lack of significant movement did nothing to hamper the bands’ spirits.

The latter half of the set brings a new song, comedically named ‘Death To The Lads’. The frontman introduces it with an appreciative note that the front row is largely made up of girls, and kicks off a rousing tune taking a swipe at lad culture and violence at shows. All too soon after this, the gig is drawn to a close - the band remain onstage for the encore, acknowledging that a theatrical walk off stage would be at least a little hampered by Wagner’s difficulty in walking. The liveliest part of the (early) evening, 'Young Drunk' elicits a sweaty, nostalgia-laden chorus from the audience, briefly forgetting their slightly cramped, humid surroundings.

While the heat may have taken its toll on the crowd, and an injury restricted the movement of a charismatic frontman, there was nothing to fault in The Smith Street Band’s performance, and the tight set-list crammed into less than 60 minutes would have left few disappointed. If only we could have had another hour or more of fun, instead of the more notable but uninspiring football.