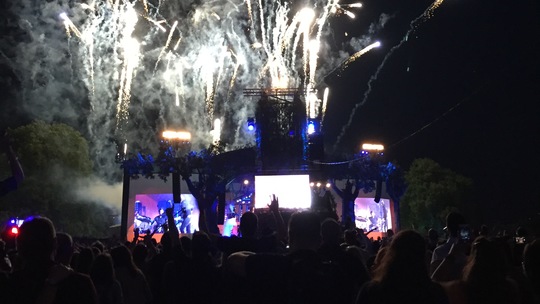 On a warm and crowded Friday night in Hyde Park for British Summertime, arrived Mumford and Sons. The band were a highly anticipated act, and delivered to what I would describe as a very overcrowded Hyde Park. Marcus Mumford even commented at one point that he hadn’t seen such a “sea of fucking people since Glastonbury” and his observations were certainly astute.

Without faulting the band at all, and before I continue on with the review, I am going to fault this year’s festival organisers, who for reasons beyond my comprehension, decided to move the stage to the side of the entrance (the stage has previously been on the side opposite the entrance, which allowed people to enter the venue and walk towards it). This change of format caused unnecessary congestion for festival-goers trying to enter. In addition, the fans who rightly wanted to remain close to the stage in anticipation of the start of the set, inadvertently caused human traffic chaos, with it taking close to a half hour for me to walk along the entrance path into the centre of the arena.

Logistical anomalies aside, as soon as Mumford and Sons came onto the stage, the over crowdedness was forgotten, and the mood broke into immediate exultation. This is the third time I've seen Mumford and Sons, having seen them previously at Bestival many moons ago, and more recently at the Olympic Stadium. I can say with some certainty that listening to them makes me feel almost immediately joyous and relaxed, so much so that one can almost imagine lying in a roofless barn staring up at the stars whilst chewing a piece of straw.

Well, there was no roof in Hyde Park, but if there were, Mumford and Sons would have certainly blown it off. The boys played a bit of everything, starting off with songs from their 'Babel' album and then moving into “The Little Lion Man” from 'Sigh No More', and following up with “Believe” from 'Wilder Mind'. Although I am a Mumford traditionalist, in that I'm still getting used to some of their songs from 'Johannesburg', it was actually a joy watching the stage when Baaba Maal, the very best and Beatenberg came on stage. Having attended the concert with my friend, who said she couldn’t wait for the 'Lion King' songs to come on, I must say that the Baaba Maal/Beatenburg segment was amazing, as were their clothes – which were nothing short of swinging lame print inspired fabulousness.

I'm almost certain Mumford and Sons’ aim was to get as many musicians onto the stage as they could, and they succeeded. It brought a familiar atmosphere to the stage and to the crown and all in all just jolly good fun to watch. The conglomeration of artists performed songs such as “Wona” and “Si Tu Veux”, but I was blown away by “There will be Time", which is slowly becoming an M&S favourite of mine.

Of course M&S moved in to close their set and overjoyed the crowd with “I will wait”, for which everyone delightfully linked arms and spun around like a crazy mob of square-dancing cowgals and boys.

My highlights of the night (aside from Babba Maal and Beatenburgs outfits) had to be (a) papa Marcus Mumford walking into the crowd and crowd surfing back to the stage, in a semi shirtless and a somewhat visibly uncomfortable manner – although in fairness one must inevitably expect a bit of inappropriate touching when crowd surfing; and (b) the whole band moving into a centre stage in the park armed with nothing but guitars, attempting to quiet the crown so that they could sing a very intimate encore acoustic rendition of “Timshel“ and “Sister”.

Combined with the almost perfect weather and a firework send off, this was certainly a night I thoroughly enjoyed and will definitely remember. Brilliant!