Dalston Music Festival celebrates Hackney's finest music and culture with an all day, all night party right in the... 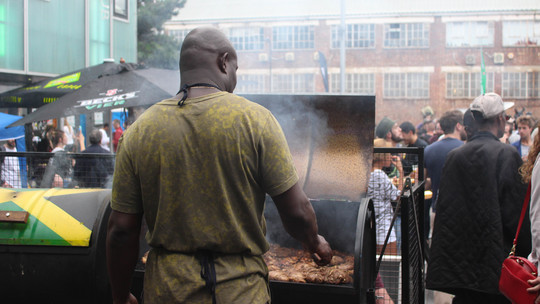 A lot has been said about the gentrification of Dalston during recent years. Take a look around Dalston Square and you’ll see the striking modern housing development built on the actual foundations of the Four Aces, one of London’s most radical music venues – the first to champion and support the emerging black music scene.

But as I stand in amongst the lively crowd on Gillett Square with Newton Dunbar, the club’s former owner, standing behind the decks in front of me, this notion of displacement, divide and upset has never seemed less real. There is no middle versus upper class, no black versus white, no old versus young. Everyone is brought together in a huge melting pot of cultural vibrancy, and this is what epitomized Dalston Music Festival as a whole.

This is the second year that Dunbar took on Dalston Music Festival’s main stage. Bringing a little bit of the Four Aces with him wherever he goes, Dunbar spun a mix of old skool reggae and jungle that had everyone up on their feet and dancing.

Another highlight of the main stage was Roger Robinson, aka the lead singer of King Midas Sound, who caught the crowd’s attention with his strong, commanding voice and gritty lyricism. Accompanied by Jahtari’s Disrupt, the two caused quite a scene when they busted out Johnny Osbourne’s “Budy Bye".

Fumaça Preta was one of the standout acts of the evening. Led by half Portuguese / Venezuelan drummer Alex Figueira, Fumaça Preta (pronounced "Foomassa Pretta") surprised everyone with their Latin meets experimental rock meets post-punk infusion. Performing with that rare kind of energy that gets the crowd going, their unhinged exuberance and complete lack of inhibition was truly fascinating to watch.

Over in Dalston Boys Club, it was Vanishing Twin who stole the crowd. Dressed head to toe in glitter and handing out sparklers to the crowd, their characteristic otherworldly sound had the entire audience swaying from side to side – it was certainly not hard to see why they’ve been championed by the likes of Gilles Peterson.

From the sunshine-bathed set by Roger Robinson and Disrupt to the glistening performance of Vanishing Twin, there was a certain light to Dalston Music Festival that shone throughout the day. While the intermittent programming during the day meant that the energy occasionally dropped, it was, all in all, a great show. Let’s hope that it continues to be a regular fixture in the festival calendar.