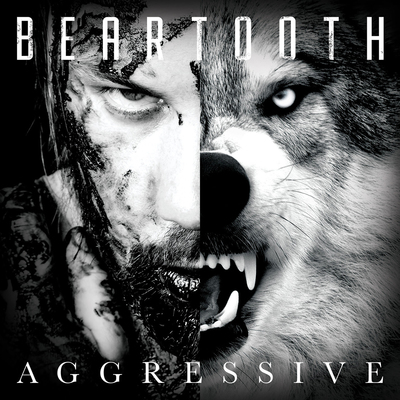 For those who have been following the scene over the past two years (and those who attended Download festival this year), the name Beartooth would be quickly recognised as they slowly rise to the surface as growing contenders in the rock world.

Caleb Shomo was never a nobody before he joined forces with his new companions but rest assured that this project is definitely what the singer has been waiting for, in terms of really standing out amongst his peers as a prevailing front man.

After a thick flourish of proceeding positive feedback in association with 2013’s debut of ‘Disgusting’, the group opened huge doors to where they could continue their music and what could/should be suitably tweaked.

Their second studio album, ‘Aggressive’, tethers their points and technique together, amplifying their sound to reach an apex that waits to be unleashed. As their material progresses, the rhythm patterns to the music style admittedly become knowable to trained ears but the chosen purpose to infect fans with the catch factor of natural feet tapping and vicious head rocking leaves the musicians with no other option than a little predictability.

The Columbus quartet (parting ways with drummer Brandon Mullins) have been lazily categorised under the ‘metalcore’ genre of fusion of metal and punk which most alternative bands are currently being thrown into, which ‘Aggressive’ leaves rightly questioned as it edges its way closer and closer to something more hard punk rock than your typical metal concoction.

The title track “Aggressive” and “Censored” are more or less what they say on the tin, storming into an onslaught of punchy riffs, jagged plectrum stabs and their usual production of epic chorus chants that show off Shomo’s dramatic highs and lows, Taylor Lumley and Kamron Bradbury’s fast-fret work and whatever aspirations of destruction they hadn’t already interpreted into notes instead of fists.

“Hated” takes on a chunky Anberlin-alike instrumental style of alternative guitar verses from the two guitarists, the pop rock skulks into plain sight before latching itself onto a good portion of the remaining tracks including “Loser” and “Sick of Me”.

This is partly alleviated however with “Always Dead” and “Rock Is Dead” smearing the album with a thrilling fraction of good old 90’s hardcore punk that is sure to raise pulses and commit support to the hard-hitting entourage.

The feathered reactions these subtly multifarious methods provoke all steadily tread towards the same conclusion. ‘Aggressive’ wants to be one irate LP and although it unfortunately falls short of the instrumental antagonism required to achieve this, it is still anything but an album to avoid.