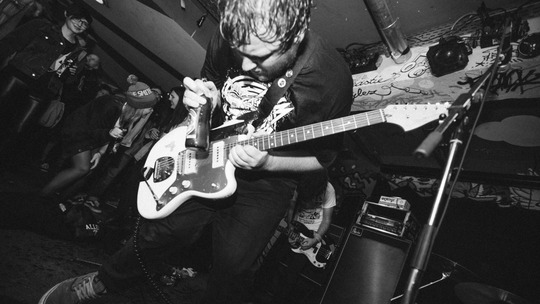 Woahnows took to stage first with their upbeat, fast paced pop-punk. The band played frantically with Vocalist/Guitarist Tim Rowing-Parker technical parts with seeming ease. The ferocious drumming from Adam Wherly was too much for one cymbal stand to take, requiring a replacement halfway through the set, and I was surprised to see the kit withstand the assault even that well.

The repeated assurances from Tim that “We’re having fun tonight... this is fun” could have given the show a weird performance hostage situation vibe, but the constant smiles during their set let you know he meant it.

Apologies spent their set flirting dangerously along the line between honesty and cliché. Fortunately whenever a slightly suspect lyric escaped, headbanging riffs dragged them back onside. The band were received well with the audience moving to the new songs alongside the old. The music is heartfelt and induced a very personal reaction from a passionate crowd which the band responded to well. Overall it felt that Apologies weren’t exactly bringing anything new to the table, but the set was enjoyable if not very memorable.

The Smith Street Band frontman Wil Wagner perched on a bar stool throughout their set, due to a recent leg injury. This didn’t slow them down however, and they tore through their set like four raging bulls on speed. It’s hard to not enjoy seeing a band like TSSB, whose lyrics greet you like an old friend the first time you hear them. That’s not to say they needed to rely on this bonus with the kind of playing which would make even the new Blink album enjoyable.