Evans The Death Fail To Impress In New Cross 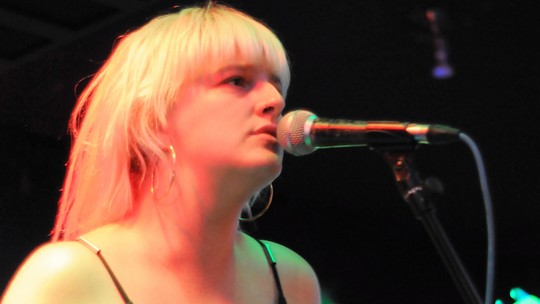 This was one of those strange evenings where the best act came on first.

Gears are a three-piece from London with a lively brand of punk influenced indie rock. The band are vocally weak but there was a likeable energy about their performance as they tried to inject some life into the small early evening crowd at the New Cross Inn.

Sadly matters deteriorated from there. Allison's Gate turned out to be a rather drippy young woman singing off the wall lyrics to a one chord strumalong, and as for 5 piece punk band Porridge Radio it would take a whole separate review to do justice to how bad they were. Let's just call them shambolic and leave it at that.

The headline act Evans The Death are a band we were looking forward to seeing. The London five piece have been together since 2011 and before this year had released two albums that have gained some critical notice. 2015's 'Expect Delays' with its abrasive hard edged rock coupled with pop hooks was particularly popular.

We were sitting enjoying a drink at one of the pub's benches when the band meandered onstage, and vocalist Katherine Whitaker cheerfully told everyone that the band wouldn't start their set until we'd all stood up. On reflection we should have stayed where we were.

The band's third album 'Vanilla' seems to have deliberately gone for a less constructed approach having been recorded virtually live in limited studio time with minimal track editing. It feels like an attempt to capture the energy of a live show on record, which is ironic considering how unfocused and lacking in power the band were tonight.

The music had flashes of melody and structure, but all too often degenerated into squalling guitars, raucous vocals and unnecessarily abrupt song finishes.

I am not sure it was entirely Evans The Death's fault. Whitaker was clearly having trouble with her voice even at the start of the set, and she was done no favours by the terrible sound mixing. There were tinny intrusive cymbals, almost inaudible bass and Whitaker's vocal was mixed right down. The need to shout her way through the songs to be heard above the guitars led to Whitaker's singing deteriorating as the set went on.

By the end the set list was being chopped around with frequent long thumb-twiddling pauses, alcohol guzzling and a general air of careless disorganisation.

And that was the biggest part of the problem. It's fine to mess around with your mates as if you are having a jam session in your garage, but don't do it when people have paid to come and see you. It just seems a little unprofessional. Maybe we had a flavour tonight of why Evans The Death have not pushed on since 'Expect Delays'.