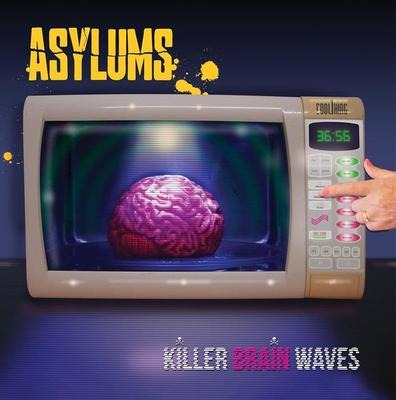 A wise man once advised me that some feelings completely surpass anything which we can articulate through conversation... and can only be found in a relate-able entity in art. That wise man and the rest of his band just happen to have their first album out now with a mix of fuzzy feelings which stop all conversation. Luke Branch, Jazz Miell, Henry Tyler and Michael Webster have hit on a winning formula with the release of 'Killer Brain Waves' out now on the sexiest bright pink vinyl you'll ever set eyes on, as well as the more conventional CD and virtual reality downloads.

Asylums (as the awesome foursome from Southend are collectively known) have been building up to this album for a couple of years now, and just lately in the last few months, the roller coaster ride of illustrious infamy has really gathered speed. I’ve seen them play a couple of festivals already this year, with more up their sleeves, and a whole raft of UK gigs pending, including the album launch at The Lexington on 28th July.

My intuition tells me that these guys don’t sleep much, incessantly on the go, always occupied with one project or another, ingenuity constantly flowing from their pores and seeping from their well-worn trainers. The band’s publicity shots add to that impression with a series of stylised photos, most of which showcase the wide-eyed, blurry-haired band in everyday situations contrasted with odd, atypical postures or props. If ever there was a picture needed for the ‘before’ scene of some insomnia treatment, Asylums look like the guys to call.

Asylums meteoric rise has been backed by a number of music loving channels including Radio 1, BBC Introducing and Radio X. It’s sometimes tricky to live up to such high expectations but this group manage it with aplomb in bucket loads. With 'Killer Brain Waves', they prove more than anything else that the wait has been well worth it.

The album starts with an electrifying jolt, a wake-up call to anyone who fancies a little sit down upon their laurels. ‘Second Class Sex’ opens with some screamingly orgasmic guitar and continues in that throbbing vein for just over 2 minutes, when it comes screeching to a halt like an over-excitable premature ejaculation. This leads straight into ‘I’ve seen your face in a music magazine’ with one of the catchiest refrains I’ve heard this year. It’s a busy supersonic speed of sound, and it’s hard to pin it down before it darts past and leaves a thoughtful little gift of an earworm that will last all week.

Without a doubt, this is music to get things done by, it's creativity by creatives for creatives. If post-punk-grunge-pop had been around during the time of Plato and Socrates it would have sounded like this. The wise man also told me that when you start overthinking creativity it becomes stilted and stumped. Which thankfully is the polar opposite of what we hear throughout 'Killer Brain Waves'.

Songs continue to start and end with no warning and take you by surprise with their sudden and immediate recognition. It's like meeting an old school friend who's lost a stack of weight, dyed their hair shocking blue, but who still has the same battered converse and sparkly eyes as ten years ago. Fresh yet familiar. Old with the introduction of the all-knowing new. Challenging and simultaneously comforting.

All 12 songs on the album gel together in one big cohesively fuzzy mess of warped distortion and relevant lyrical style. Songs touch on political hot potatoes, as is the case with 'Joy in a Small Wage' a compact ditty of optimism and hope of a continued joie de vivre despite working all the hours for a shitty pittance of a minimum wage.

‘Necessary Appliances’ is another killer track with lyrics focusing on the bright and shiny large electricals that fill our homes and their brevity of functionality, with a political subtext of conformity, and communities that are split asunder by the insularity of living and working alone, without the need to physically interact with other human beings. Dark days.

A few songs have echoes of Asylums trademark guitar sounds trickling through, and I’m sure that one memorable segment of ‘Wet Dream Fanzine’ is the riff from ‘Second Class Sex’ just played backwards, mashed up and distorted to the nth degree. The songs all sound like Asylums own brand and style, even with the nuances of early Bloc Party, classic REM, and (dare I say it...) Nirvana just on the tip of the tongue of the overall feel on this most accomplished debut.

'Killer Brain Waves' has to be a contender for album of the year. With such an assured and poised air to their inaugural LP, it will be fascinating to see where Asylums go next. Big love and thanks for showing us that vitality and vivacity in new music isn’t dead.