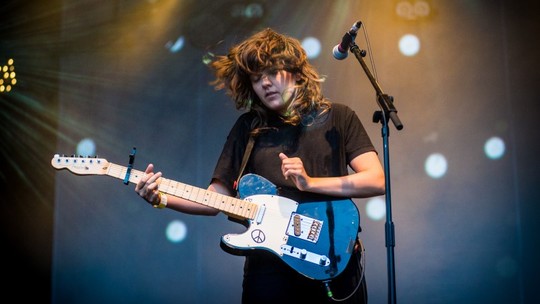 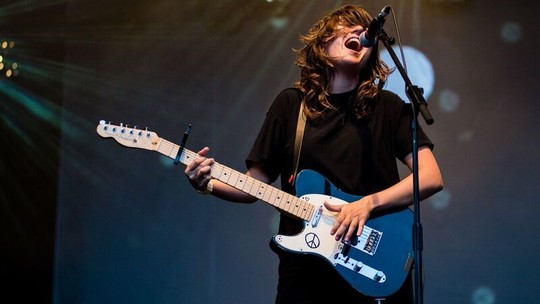 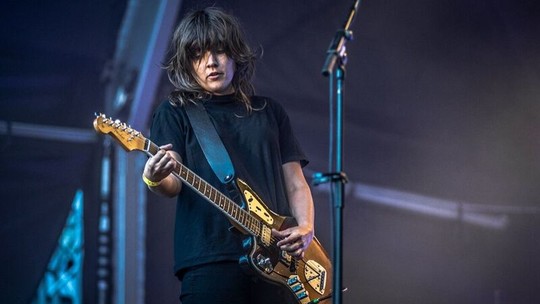 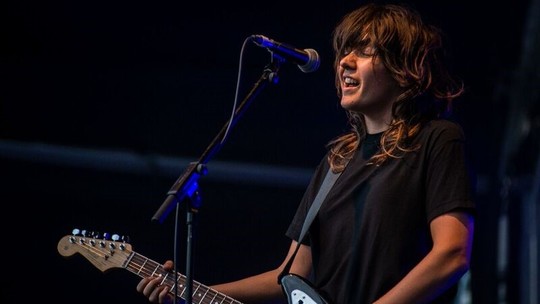 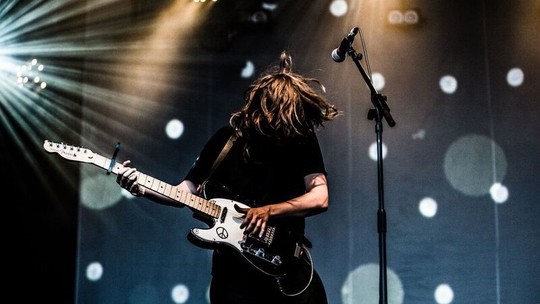 The last time I was at Somerset House was back in December for their winter ice rink Ministry of Sound spectacular. That time I got drenched to the bone as the heavens opened on the courtyard. For this evening's open air gig as part of their Summer Series I wasn't wildly optimistic about staying dry, given the inclement nature of the summer of 2016 so far. Somerset House is the most glorious setting for a full on, all round synesthetic experience.

Throughout the evening, as the light from the wispy clouded sky creates a stunning overhead backdrop, and the neoclassical stone of the surrounding buildings is gradually bathed in varying shades of rainbow hues, my senses are in overload. Add the sounds and it's all 'OK go' and blast off into hyper-reality. The cobbled courtyard filled up quickly, with almost a festival air at
the start of proceedings, people dotted around, seated on the ground and there was a huge aura of anticipation for the amazing Antipodean who would be heading up on the vast spaceship like stage.

First though, an early evening support slot from the dry sardonicism of Bill Ryder Jones, who despite previously having been in The Coral for about thirty years still only looks about 28. His opening remarks of 'I'm gonna make this as quick and as painless as possible' kind of set the scene for his brief opening slot.

With his Adidas trainers, striped top and baggies, and the rest of his band in a trancey dreamlike daze, it was almost as if the Coral had gone deep sea diving to some mystical underwater world and slowed everything down by five or six notches.

What did amuse me were the nice little soupcons of cutting patter between tunes such as “Who's here for Courtney Barnett? (cue cheers from the growing crowd)… Me too but I'm getting paid to be here…” Very dry and droll delivery. And a cheery humbleness of the kind that doesn’t quite believe his luck.

Following a set cut short by one song, and a super-fast changeover, due to the Somerset House 10.30pm curfew, and with the air pulsating with expectation, Courtney Barnett and her two man band careened onto the vast stage, all clad in plain black, and looking like a set of super cool triplets. ‘Bones’ Sloane on bass and Dave Mudie on drums take their places, and Courtney launches straight into it, with barely a nod of acknowledgment to the gathering of adoring fans.

Her ease and naturalness with a guitar come across immediately. It’s as if Barnett was born with a guitar slung across her hips, and she makes it look like the easiest thing in the world to string out those sounds. Barnett is one of those women adored by all spectrums of music lovers, young or old, male or female, and tonight the ‘Everybody Loves Courtney’ show is in full effect.

In comparison to the informal chat from the opening act, Barnett is very much a head-down, let’s play some tunes, cut the conversation kind of performer. Which totally suits the admiring crowd, because less patter equals a more musical use of the fast diminishing minutes.

A wide range of total pedal-to-the-metal rock, witty indie melodies, and dreamy chilled whispers, showcase Barnett’s versatility over the 80 minute set. Audience participation seems a little on the muted side, perhaps just down to the fact that most are standing in beaming awe of a natural born musical assassin and her ability to bang out straight streams of delight, or due to the highly reactive security team putting a stop to any hint of shoulder lifts or heaven forbid – crowd surfing. But despite this, the front few rows manage to get a bit moshy during ‘Pedestrian at Best’ and join voices with the sweet serenade of ‘Depreston’.

After a brief two minutes off stage, Barnett returns for a solo rendition of ‘Ode to Odetta’ from her 2013 double EP. It’s a charming moment and lends an air of intimacy and closeness to proceedings. Then the rest of the band saunter back and give a final blast of rock in the last five minutes before curfew. ‘Nobody Really Cares If You Don’t Wanna Go To The Party’ gets the crowd jumping once again as the last traces of daylight disappear from the sky and the cobbled courtyard ends this episode of the series with Barnett on her knees, fuzzing up the strings, and finally defiling the drum kit with her instrument before leaving the stage to rapturous adulation.