<p>Bilbao BBK Live is a rock and pop music festival that takes place annually in the city of Bilbao, Spain.</p>

Music In The Mountains: Bilbao BBK 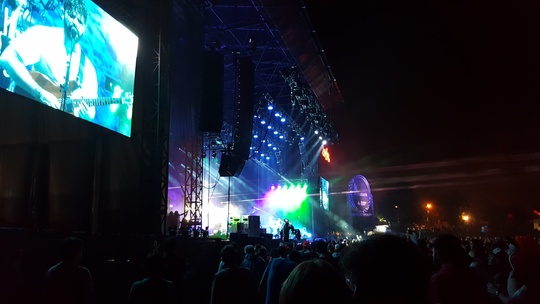 Located in Kobetamendi on Mount Cobetas, Bilbao, BBK Bilbao Live is a three day festival dedicated to rock and pop music. The stunning location offers 360 views of the surrounding mountains as well as a panoramic view of the city. Having previous festivals headlined by the likes of The Police, The Prodigy, Coldplay and Madness to name but a few, every year seems like a challenge to exceed the line up quality of the previous edition, but 2016 did not disappoint. With the likes of Tame Impala, Ocean Colour Scene, Grimes and The Foals there was something for almost everyone regardless of age or taste.

As well as the beautiful scenery and great value line ups, the set up of the festival is also a definite attraction for fans. The use of two main stages means every thing moves like clock work. Once one band has finished its a few steps over to the other stage, so there is no waiting around for the big names as the stage is cleared and set up for the next act. It also meant you could see pretty much every act at the festival, so there is none of those difficult decisions about which of your favourite artists you do not want to miss, or whether to half and half the sets.

The opening day kicked off with a massive line up and promised even bigger things for the following days. On the bill were the likes of Scottish synthpoppers Chvrches, M83, Arcade Fire and Years and Years.

One of the first acts to perform at BBK Live was Gallant, a young American singer song writer. The singer, supported by a backing band offered a performance of soulful tunes, reminiscent of Frank Ocean with a bit of The Weeknd thrown in for good measure. His charismatic and energetic performance was a great way to ease everyone into the festival, an easy listening repertoire to enjoy the beer and freshly made pizza in the evening sunshine. Despite being one of the first acts to play, there was still a sizable audience, and Gallant entered the loving crowd during his final, and most well known song, ‘Weight In Gold.’

Next up were Brits Years and Years, who shot to popularity last year with their hit single ‘King.’ The band played an energetic set laden with some of their most well known songs including the aforementioned 'King', 'Shine', 'Eyes Shut', 'Desire' as well as a cover of Drake’s hit 'Hotline Bling'. Front-man Olly Alexander was clearly overwhelmed by the adoring fans who showered him with gifts throughout the set, pushing him to tears at one point, before taking a few moments to return the favour to his adoring fans with hugs and photos. Years and Years were definitely one of the highlights of the festival, and were obviously going to be a difficult performance to beat, despite being one of the first acts to play. The set was made more enjoyable from the fact that the band seemed to enjoy performing as much as the crowd did watching them.

As the sun started to set, Chvrches began their set, with a selection of songs from albums new and old. Lead singer, Lauren Mayberry, took a brief pause to show her love for the predominantly continental European crowd and to express her views on the recent British referendum before performing 'Recover'. M83 followed with a strobe ridden set which lit up the hills with both music and light. It included tracks such as 'Midnight City' and 'Intro' as well as a few new songs from their recent album 'Junk'.

Up next were Arcade Fire with a brilliant set that appeared to be the highlight of most of the crowds night. A packed and lively performance treated fans to a plethora of tracks including 'Rebellion', 'Wake Up', 'Tunnels', 'We Exist' and 'My Body is a Cage' to name but a few.

Jose Gonzalez was the first act seen on Friday, with a great, but calm, performance. He played songs in both Spanish and English, but the highlight was the universally acclaimed 'Heartbeats' which, as expected, was the finale of Gonzalez’s set.

Pop veterans Ocean Colour Scene took to the stage next, with a performance of their renowned album 'Moseley Shoals'. This was an extra special treat for native Spaniards as it was the only show they will be performing in Spain this year! The set also included a few extra tracks including 'Get Blown Away' and 'Travellers Tune'.

Another stand out performance of the festival, and the best act of the day for Friday was Grimes. The young and energetic singer performed an extremely lively set to a crowd only slightly less lively than her. It was a tough ask to out do Grimes with movement as she wildly flitted around the stage like a possessed pixie, supported by her two dancers. She played a plethora of her work including 'Go', 'Venus Fly' and 'World Princess pt II' as well as a cover of a song by Taiwanese rapper Aristophanes. A power cut put a brief end to the energy, supposedly caused from overworking the generators with all the lights and volume in her set, however, she returned after around twenty minutes with her dancers and continued her lively performances.

The finale day, Saturday, saw more of the same in the level of acts, including Tame Impala and Foals, but they had a lot to live up to after the amazing performances on prior days. As the sun set behind him, Father John Misty took to the stage to put on a great show. Backed up by heavy guitar riffs and pounding drums, his set included songs such as 'Bored in the USA', a parodied homage to Born in the USA, as well as 'Ideal Husband' and 'True Affection'.

Next up were Tame Impala, who appeared to play to one of the biggest crowds of the festival so far. Fans packed out the stage area, with others gathering on the hills in an attempt to get a decent view of the Aussie rockers set. They literally lit up the hills in the darkness with multiple colours of light and visuals to accompany their set. The band played well known tracks such as 'The Less I Know The Better' and 'Let It Happen'. One of the more impressive songs during their set, although it was overall pretty brilliant, was 'Elephant'. As they performed, the stage erupted into flashes of oranges and yellows.

One of the final performances of the festival, and one of the most anticipated, was both the longest and most impressive of the weekend. Foals put on a monster show that went on for almost two hours, with them performing a massive selection of the back catalogue. This included performances of 'What Went Down', 'Give It All', 'Two Steps', 'Twice', 'Spanish Sahara' and probably just about any track you can think of by them. Despite this grueling performance, neither the band nor the audience seemed to tire. Foals, especially front man Yannis Philippakis, kept up the energy levels until the final moments of their show. Philippakis leapt around the stage and even entered the walkway between the crowds to thank and take photos with fans as the show came to a close.

Also, a new addition to the festival was the Basoa stage which was enclosed within a secluded forested area of the park, with speakers disguised in the trees. Signs encouraged revelers to refrain from taking pictures and to just enjoy the music and surroundings in this area, something they could do to their hearts content since they had a selection of DJ’s playing early into the morning (7 a.m.!).

Bilbao BBK Live started as it ended, with great performances. Gallant, the first act seen, offered a soothing, yet lively, performance to ease fans into the festival spirit. Then a couple of days later the Foals end with a powerhouse of a show to close the festival.