They Want To Be Big, So It's Not Clever 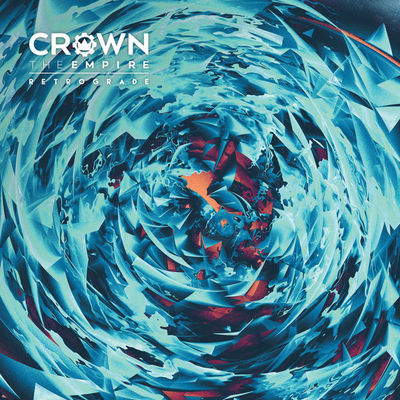 As a rule of thumb, any subgenre with the prefix 'post' tends to have intellectual (some would say intellectually snobbish) pretensions. Add to that the advance press from Brent Taddie and David Escamilla that Crown the Empire's latest album was based on the theme of "space" in all possible senses. Maybe I got the wrong idea as an outsider to the world of post-hardcore, but I was expecting a rather more intelligent work than this.

The spoken quotes from cult sci-fi movies peppering the album are the most obvious reference to a space theme, although the trippy 'Oxygen' has some vague reference to how "we're not alone", but this notion is not developed further in the song. Meanwhile, 'Hologram' and 'Aftermath' are about needing and then getting space from relationship problems, so they tie into the theme in the figurative sense.

However, this is no concept album. Many of the songs are more about articulations of modern mantras. For instance, some critics have expressed disappointment that 'Zero' is a simple song compared to Crown the Empire's past work and therefore questioned why it was released before the album. I'm guessing it was a strategic decision. It may annoy some of those who've followed Crown the Empire from the start, but an accessible song about taking risks is likely to pull in a new contingent of fans. Add to that the exhortations to change the world in 'Kaleidoscope' and 'Are You Coming With Me?' and the cry of defiance against an adversary in 'Weight of the World' and you have some very obvious attempts at rebellious teenager anthems.

Musically, too, it would seem Crown the Empire are trying to broaden their appeal. There don't appear to be as many harsh vocals as on the previous album: the most extreme it gets is on the heavily sarcastic 'Lucky Us'. Despite flashes of drumming prowess, notably in 'Weight of the World', industrial influences are more the norm. 'The Fear is Real' is the most industrial-sounding track on the album, but "all this machinery making modern music" pops up intermittently everywhere. For the most part, it fits in well, but the intro to 'Signs of Life', on acoustic guitar, could really have done without the drum machine. The combination sounds like something you'd hear at breakfast time in McDonald's.

One has to wonder whether the band chose the title 'Retrograde' in anticipation of possible reactions from purists. They chose to abandon the story of previous albums, deciding that they couldn't stick with it forever, and they've also given up on the goal to be heavier than anything else in their area. If this gamble doesn't pay off, they'll lose a lot of goodwill. If it does, then as Joe Elliott might say, they'll generate hysteria.