Music As Exotic As The Places That Inspired It 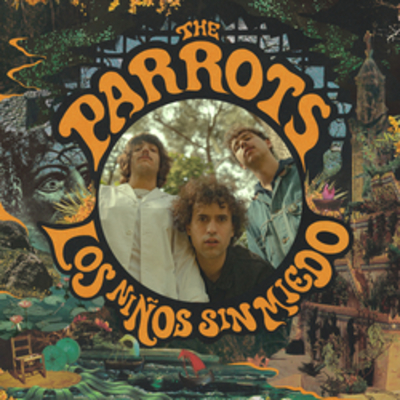 “Fuck you! You ignored us for so long!”.

Interest in the Madrid music scene might be on the rise, but the Parrots believe it to be long overdue. Excitement surrounding the lazily-coined ‘Madrid New Wave’ has been steadily growing following Hinds’ explosion onto the international stage, who kicked things off with their excellent debut album 'Leave Me Alone'. Coincidentally, this is a record that was produced - in part - by Diego Garcia, frontman of the Parrots.

Garcia, along with Alex de Lucas (bass) and Larry Balboa (drums), have been making music as a trio for three years and believe they offer something different to what’s been exported from the Spanish scene of yore. “When we started it was all indie bands, indie, indie, indie - but we offer rock ’n roll until the end, as hard as we can”. 'Los Niños Sin Miedo', the group’s debut album, is their platform to prove this.

Built up to through half a dozen single releases, Los Niños is a recording as fast-paced as the Parrots’ live show, with the ten tracks coming in at just over 25 minutes. It’s breathless garage-rock music, with Garcia’s fuzzy vocals sounding as if recorded through Dave Davies’ infamously slashed amplifier.

Paco Loco, the Spanish engineer with whom the album was recorded, instructed the three-piece to be “dirtier, with more distortion” when in the studio - something which has given the group’s music a scruffier, more recognisable edge. At no point however does it seem to go overboard; the tracks are all upbeat with the distortion simply removing the sugar, ensuring that Garcia’s want for “rock ’n roll until the end” is delivered.

‘No Me Gustas, Te Quiero’ opens with a ‘Gunga Din’-esque Libertines riff, before the all-band shouted chorus evokes early Black Lips recollections. 'The Road That Brings You Home’ sounds like a hazy Creedence number, giving an echoed new lease of life to a Pendulum cut-off and the fantastically titled ‘Windows 98’ has guitars whining as loud as any Texan stallion.

The years spent touring the world ahead of releasing Los Niños has allowed the Parrots to glean musical influences from all angles, which has resulted in a brilliantly bizarre album. It’s patient, it’s rushed, it’s reserved, it’s brash.

Los Niños is released through Heavenly at the end of August, conveniently timed for those Bank Holiday parties that need sound tracking.