Tranquil Fun In The Sun At Citadel Festival 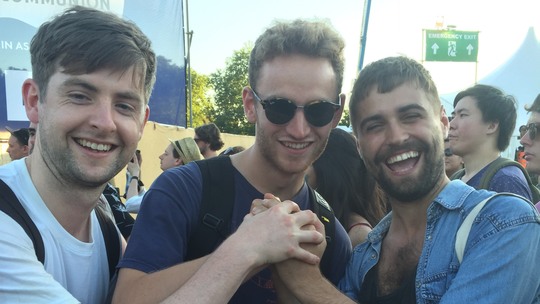 Back for its second year in East London’s Victoria Park, Citadel follows two slightly more manic days of Groove Armada's Lovebox festival. Citadel, hosted by the folks responsible for the excellent Wilderness Festival, has a slightly more left-field line-up. Its' website inviting attendees to rock up early to read the morning papers and partake in open mike political debate whilst sipping on a Bloody Mary and enjoying some crushed avocado for breakfast from one of the many excellent on site street food vendors.

We started the day by heading over to the SoundCrash stage to the see the excellent GoGo Penguin after narrowly missing out on the back end of Akala’s set (darn it). They played a pounding show with first-rate renditions of "Murmuration" and "Garden Dog Barbeque". Get down to see them this summer if you can. After whilst on route to the main stage there was opportunity to partake in a sack race and get shown up by some local children who clearly thought our hola-hooping skills left a little to be desired – to be fair I think they were professionals.

Cats Eyes treated the main stage revelers to an enjoyable set of eclectic tunes. The sun was sauntering so we got an ice cold beer and headed over to see Maribou State on the SoundCrash stage. The highlight of the set came in the form of "Midas" – a song that’s stress-free vibe encapsulated Citadel’s mantra down to a T.

It was then time for another beer, this time of the Mexican variety to accompany some excellent tacos from DF-Mexico, before heading over to see the superbly talented Tom Misch – who’s having a busy summer. Misch played hits from his 2015 'Beat Tape 2' and more recently released songs "Crazy Dream" and "Watch me Dance". The only complaints heard from the crowd were that the set didn’t last a little longer.

Canadian composer Caribou then played the main stage; he and his band clad in all white and intimately huddled together in the centre of the stage. He’s got a back catalogue deserving of a headline slot – with crowd pleasing tunes like "Can’t Do Without You", "Odessa", "Sun" etc.

My penultimate act of the day was the excellent Lianne La Havas – who may well herself be headlining shows like Citadel in years’ time if she can produce an album with half as many hits as 2015’s "Blood". It’s was here where we got to meet man of the hour Tom Misch (see photo above) to discuss how excellent he is and share a can of lager.

As the day was coming to an end there was time for a ride on what I’m sure was the world’s best fairground ride. After narrowly avoiding throwing up it was time for Sigur Ros to close proceedings, which they did with chilled out Icelandic aplomb, drawing proceedings to a close and ending what was an excellent festival.