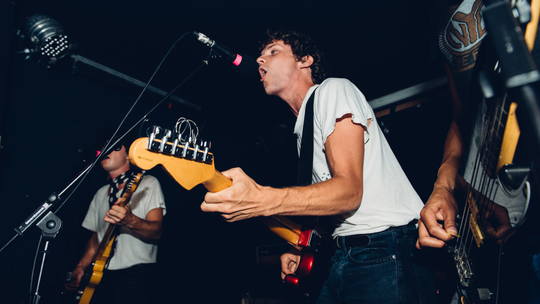 “Of course we can just be friends”. A sentence that carries as much long-term hope as being considered “New York’s best new band”.

In the city that never sleeps there’s a permanent flux of bands trying to establish themselves, so can Public Access TV - current holders of the aforementioned title - ride the wave rather than be dredged from the swell like the Bravery? Fronted by John Eatherly, with Pete Star on drums, Max Peebles (great name) on bass and Xan Aird (greater name) on lead guitar, Public Access TV tick the boxes when it comes to being a cohesive collection of handsome, musically-able individuals.

In terms of the comparisons they frequently draw, they seldom work in Public Access TV’s favour. They’re not as cool as the Strokes, not as reckless as the Ramones, not as interesting as Talking Heads, not as stylish as DIIV... yet it doesn’t seem they try to do any of those things, instead developing their own pop-twist on grungy rock music. At the group’s sold out Old Blue Last show, there definitely seems to be plenty of public interest in the band - even without an album yet released (debut effort 'Never Enough' isn’t out until September).

‘In Love and Alone’ is Weezer-esque weedy punk music, with a catchy chorus held together by a heavy rhythm section. The bouncy verse and drawled lyrics of ‘In the Mirror’ are reminiscent of the Strokes circa 'Room on Fire', and ‘Patti Peru’ is the track that best sums up Public Service TV; a pop-rock song that's soft on record yet slips into something much heavier live. The musical transition is immediately comparable to anything written by Palma Violets, and within the small Shoreditch venue the New York group's sound becomes a lot scruffier and - ultimately - exciting.

Public Access TV's flash-in-a-pan reputation isn’t helped by the fact Alexa Chung has been spotted at shows before (unless it transpires she’s simply looking to add another frontman-shaped notch to her bedpost - you’ve been warned, Eatherly), but the four-piece are deserving of more than just the ‘hot new thing’ tag. Based on the tracks aired at the Old Blue Last there’s plenty of strong material to fill Never Enough, and with a live show that’s been drawing the plaudits they’re certainly establishing credentials for longevity.